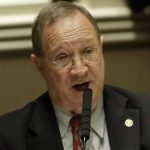 Under existing law, an appointed member of the Board of Trustees of the Alabama Community College System may not serve more than two consecutive terms of office

Under existing law, an appointed member of the Board of Trustees of the Alabama Community College System may not serve more than two consecutive terms of office

(a) There is established a Board of Trustees of the Alabama Community College System. The board shall be composed of the following members:

(1) The Governor, who shall be ex officio president of the board.

(2) Seven members appointed by the Governor so that one member of the board is a resident of each of the seven congressional districts in the state as the districts are constituted on May 12, 2015. The member appointed by the Governor pursuant to this subdivision, representing the congressional district in which the main campus of Athens State University is located, shall serve as the member of the Board of Trustees of Athens State University pursuant to subdivision (3) of subsection (a) of Section 16-47A-4.

(3) One ex officio, nonvoting member appointed by the Governor who is actively serving on the State Board of Education.

(4) One member appointed by the Governor from the state at large.

(b) All members appointed by the Governor shall be free from any contractual, employment, personal, or familial financial interest in the Alabama Community College System.

(e) The members of the board shall be qualified electors of the State of Alabama, and the membership of the board shall be inclusive and reflect the racial, gender, geographic, urban/rural, and economic diversity of the state. In making appointments to the board, the Governor shall give special consideration to those persons who have attended a community or technical college and who are familiar with the two-year college system, or who have business leadership experience. No employee of the state may serve as an appointed member of the board. No appointed member of the board may serve more than two consecutive full terms of office not counting any partial term to which the member has been appointed. Other than the ex officio members of the board, no person currently serving in any elected office may concurrently serve as a member of the board.

(f) Upon appointment, and after confirmation, of the initial members of the board, the board shall meet to organize itself, to elect officers, other than the president, as the board deems appropriate, and to transact any necessary business. The board may adopt bylaws to govern operations and create committees as deemed necessary. This organizational meeting of the board is not considered a regular meeting of the board.

(g) The board shall meet not less than quarterly on dates to be set by the board in official session, by the president, or by the Chancellor on written request of a majority of the board members. One meeting of the board each year shall be held with the members of the State Board of Education. The rules generally adopted by deliberative bodies for their government shall be observed and a quorum of five shall be present. Members of the board or any committee of the board may participate in meetings of the board or committees by telephone conference or similar communications equipment through which all persons participating in the meeting can hear each other at the same time, and participation by the members shall constitute presence at a meeting for all purposes. The Chancellor shall give notice of any meeting as required by law.

(h) The members of the board shall receive no compensation for service on the board. Members shall be reimbursed for actual traveling and other necessary expenses incurred in attending meetings and transacting the business of the board. Reimbursement shall be paid out of the Education Trust Fund in the same manner as other expenses of the board are paid.

(i) If not otherwise required by law, each member of the board shall file a completed statement of economic interests, pursuant to Section 36-25-24, for the previous calendar year with the State Ethics Commission no later than April 30th of each year, and shall be covered by all aspects and requirements of the State Ethics Law, Chapter 25 of Title 36. Members of the board shall be indemnified for any loss incurred as a result of damage done in the performance of their duties as a member of the board and for which the member is personally liable. Members shall be covered under the General Liability Trust Fund in accordance with Section 36-1-6.1.

(j) Before exercising any authority or performing any duty, each member of the board shall qualify as such by taking and subscribing to the oath of office prescribed by the state constitution, the certificate of which shall be filed with the records of the board. The Governor may remove any appointed member of the board for immorality, misconduct in office, incompetency, or willful neglect of duty, giving the member a copy of the charges against him or her and, upon not less than 10 days' notice, an opportunity of being heard publicly in person or by counsel in his or her own defense. If any member shall be removed, the Governor shall file in the office of the Secretary of State a complete statement of all charges against the member, any findings, and a complete record of the proceedings."