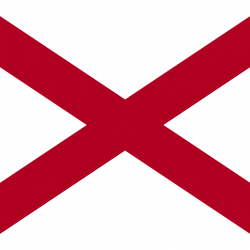 Alabama is a state in the Southeastern region of the United States, bordered by Mississippi to the west, Tennessee to the north, Georgia to the east, and Florida and the Gulf of Mexico to the south. Alabama has a population of 4,903,185 as of the 2019 census estimate, which is up 0.31% from the 2018 census estimate. Alabama's state capital is Montgomery and Alabama's nickname is the Yellowhammer State, after the state bird.

Alabama consists of 67 counties, with the largest county being Jefferson County, which is home to the state's largest city Birmingham. Alabama has a total of 461 municipalities with the oldest city being Mobile which was founded by French colonists in 1702 as the capital of French Louisiana.

Below are the current statewide elected officials in the State of Alabama. They are elected every four years, never taking place during a U.S. Presidential election.

Below are the current U.S. Senators in the State of Alabama.

Below are the current members of the Alabama Supreme Court.

Below are the current members of the Alabama Board of Education.

Below are the current U.S. Representatives in the State of Alabama. They are elected every two years.

Below is a breakdown of current Alabama Sheriffs broken down by party affiliation. Each county elects one sheriff. Click the link below to view each counties elected sheriff.