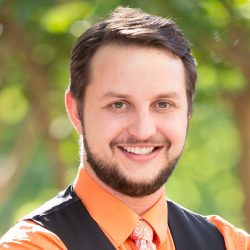 Andrew grew up in Muscle Shoals and attended Webster Elementary School, McBride Middle School, and Muscle Shoals High School, and graduated in 2004. By testing out of many credit hours, taking overloads, and enrolling in summer semesters, Andrew completed his 4-year Business Management degree at the University of North Alabama (UNA) in less than 2 years, finishing in July 2006.

Even at a young age, Andrew was always an entrepreneur. He started his first business on his parents’ porch at age 16 with his brother Matthew. In 2010 the business expanded to open a brick-and-mortar store. Infinity College Textbooks has now sold over 800,000 college textbooks on the Internet.

His second business, Gold, Guns, and Guitars, Inc. opened in April 2015 and has 8 employees. This upscale pawnshop has locations in Florence and Huntsville. Andrew also began buying rental real estate at age 19 and owns multiple rental properties, both commercial and residential.

As he is the son, grandson, great-grandson, and nephew of Baptist preachers, Andrew’s conservative upbringing helped shape his political philosophy. He began volunteering on political campaigns in 2009 and was elected to the Republican Executive Committee in 2010. After many years of volunteer campaign management, Andrew decided to run for office himself. He challenged a 28-year incumbent Democrat in a seat that had not been held by a Republican in 140 years. Andrew had the narrowest victory margin in the 2018 General Elections for State House, winning 52.5% of the vote.

Andrew resides in Muscle Shoals where he and his wife, Hannah, recently built a home. Their first child was born on October 18th, 2021, a daughter they named Liberty. The couple met on a bus in Rome, Italy in May 2016 while on a church history tour. By the end of the 17-day tour, they were already discussing marriage. Andrew proposed in October 2016, and they were married in Hannah’s home church in Greenville, SC on June 30th, 2017. Hannah is 29 years old, has a Master’s Degree in Communications, and taught special needs at Hidden Treasure Christian School in Taylors, SC before marrying Andrew and moving to Alabama. You can read more about Hannah here and more about the story of how they met here.

Andrew considers himself a Christian first, a Conservative second, and a Republican third.

Andrew Sorrell from Muscle Shoals, AL has participated in elections listed below in the state of Alabama.

The below links are relevant to Andrew Sorrell from Muscle Shoals, AL and are articles or opinion pieces published on Bama Politics. Are you Andrew Sorrell? Do you have an opinion on Andrew Sorrell? Publish an article in our opinion section and your article will appear here. A great way for our visitors to find your content and learn more about your views. Use this contact form to find out how.