Who is Terri Sewell? 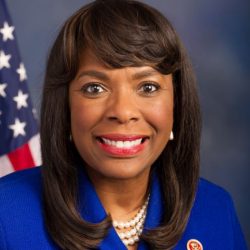 She is one of the first women elected to Congress from Alabama in her own right and is the first black woman to ever serve in the Alabama Congressional delegation.

In her short time in Congress, Sewell has held several leadership positions including Freshman Class President in the 112th Congress. In the 117th Congress, she was selected by the Democratic Whip James Clyburn to serve as a Chief Deputy Whip, and sits on the prestigious Steering and Policy Committee, which sets the policy direction of the Democratic Caucus.

Congresswoman Sewell is an outspoken advocate for jobs creation, workforce development, skills training and for providing resources and economic opportunities for her constituents in the 7th Congressional District. In addition to pursuing job-creating legislation in Congress, Sewell has implemented a results-driven approach to addressing the unemployment crisis by hosting an Annual Job Fair and job readiness workshops across the district as a part of a workforce initiative called Project R.E.A.D.Y.: Realizing Everyone’s Ability to Develop Yourself.

As the Member of Congress representing Alabama’s civil rights district, Congresswoman Sewell has been a passionate champion for recognizing and honoring the sacrifices of those freedom fighters who served as powerful agents of change. Congresswoman Sewell was honored that her first piece of successful legislation recognized the “Four Little Girls” who tragically lost their lives during the bombing of the16th Street Baptist Church in 1963. The Congressional Gold Medal is the highest civilian honor Congress can bestow. The bill passed unanimously in both houses of Congress and was signed into law by President Barack Obama on May 24, 2013 in a signing ceremony in the Oval Office to commemorate the 50th Anniversary of the church bombing.

In March of 2015, Congresswoman Sewell welcomed the world to her hometown of Selma during the 50th Anniversary of the March from Selma to Montgomery including President and Mrs. Obama; President and Mrs. George W. Bush and more than 100 members of Congress. Sewell’s second Congressional Gold Medal bill to honor the Foot Soldiers of the Voting Rights Movement was signed by President Obama on March 7, 2015, the 50th Anniversary of Bloody Sunday.

Prior to her election in 2010, Congresswoman Sewell was the first black woman partner in the Birmingham law office of Maynard, Cooper & Gale, P.C., where she distinguished herself as one of the only black public finance lawyers in the State of Alabama. A proud product of Alabama’s rural Black Belt, Congresswoman Sewell was the first black valedictorian of Selma High School. She is an honors graduate of Princeton University and Oxford University and received her law degree from Harvard Law School.

Terri Sewell from Birmingham, AL has participated in elections listed below in the state of Alabama.

The below links are relevant to Terri Sewell from Birmingham, AL and are articles or opinion pieces published on Bama Politics. Are you Terri Sewell? Do you have an opinion on Terri Sewell? Publish an article in our opinion section and your article will appear here. A great way for our visitors to find your content and learn more about your views. Use this contact form to find out how.