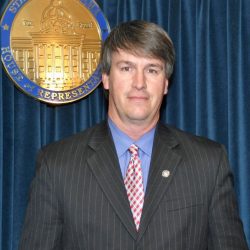 In his two terms in the Alabama House of Representatives, Barry Moore earned the reputation as one of Alabama’s most conservative legislators. Barry fought for lower taxes and less government regulation.

Growing up on a farm in Coffee County, Barry learned early what a man’s hands say about him. Hard work, along with moral integrity with a true love for God and country, shaped not only Barry’s hands but also his heart.

As Chairman of Military and Veteran Affairs, Barry authored and sponsored key legislation to include bringing the “RedTails” F-35 Fighter Squadron to Montgomery. His sponsored legislation made strides to protect military families from unfair child custody courts, secure residency for in-state tuition programs for military families and veterans, protect the licensing of working spouses through licensure reciprocity, and advocate for our Purple Heart Recipients.

Growing up on a farm in Coffee County, Barry learned early what a man’s hands say about him. Hard work, moral integrity, and a true love for God and country shaped not only Barry’s hands but also his heart. This dedicated work ethic led Barry to Auburn University, wherein, in 1992, he earned his degree in Agricultural Science. While at Auburn, Barry was enlisted in the Alabama National Guard and Reserves. He excelled at being a soldier and was a member of the Army Ranger Challenge Team in Auburn’s ROTC program. The best thing, however, that happened while in Auburn was meeting his wife, Heather Hopper Moore, whose strength, wisdom and quick wit made them an unstoppable team. Today they work and serve together in all capacities of their lives, whether at work, church or in their community.

In 1998, Barry founded his own company. He and Heather own and operate Barry Moore Industries. He started BMI with one garbage truck and a passion for business. More than 20 years later, BMI, Inc continues to grow and prosper at record levels. BMI, Inc most recently had the opportunity to assist Tyndall Air Force Base after Hurricane Michael's rebuilding efforts. Whether in business or public service, Barry’s number one focus is the needs of the people he serves. Faith, Family, Finance and Freedom are the fundamentals that guide all aspects of Barry’s life. In all decisions as a legislator, Barry measured the consequences of any bill on these four fundamentals. It’s a system that served him well and won him the distinction as a dependable, conservative vote in Montgomery. He will take the same fundamentals to Washington D.C.

On August 21, 2015, Barry became the first elected official in the nation to endorse President Trump at his first campaign rally in Mobile, Alabama. In 2016, he was a delegate at the National Convention along with his daughter Kathleen, who was the youngest delegate in the nation. Barry Moore will be the tip of the spear for President Trump and will fight and defend the Trump agenda for Alabama’s District 2 and America. Barry has signed the Term Limits pledge and the Fair Tax Pledge.

Barry and Heather have been married for 27 years. They have four children- Jeremy, Kathleen, Claudia and Jeb along with two dogs-Rocket and Dolly.

Barry Moore from Enterprise, AL has participated in elections listed below in the state of Alabama.

HB359
Workers' Compensation, number of employees not to include the employees or other person owning a certain percentage of the company for coverage purposes, Sec. 25-5-50 am'd.
HB88
Motor vehicles, truck weights, concrete mixing trucks, operation within 50 miles of home base, subject to maximum gross weight requirements, Sec. 32-9-20 am'd.

The below links are relevant to Barry Moore from Enterprise, AL and are articles or opinion pieces published on Bama Politics. Are you Barry Moore? Do you have an opinion on Barry Moore? Publish an article in our opinion section and your article will appear here. A great way for our visitors to find your content and learn more about your views. Use this contact form to find out how.

The below links are relevant to Barry Moore from Enterprise, AL and were found via our own research or sent to us from readers like you. These links are not associated with Bama Politics.