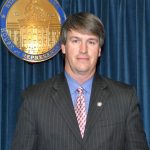 HJR283 192301-1 By Representatives Moore (B), Butler, Mooney, Nordgren, Whorton (I), Hanes, Whorton (R), Ainsworth, Harbison, Lee, Chesteen, Ingram, Polizos, Fincher, Drake and Holmes (M) RFD: Rules First Read: 01-MAR-18 192301-1:n:02/27/2018:DSM/tj LSA2018-973 URGING THE UNITED STATES CONGRESS AND THE UNITED STATES PRESIDENT TO REVIEW AND RECONSIDER THE REQUIREMENTS OF THE COMMON CORE STATE STANDARDS INITIATIVE. WHEREAS, the Common Core State Standards Initiative (CCSSI) is an educational initiative in the United States that details academic standards for K-12 students in English language arts and mathematics for each grade; the initiative is sponsored by the National Governors Association and the Council of Chief State School Officers and seeks to establish consistent educational standards across the states; and WHEREAS, the Alabama State Board of Education is empowered to establish curriculum standards for all K-12 public schools; a set of standards known as the Alabama College and Career-Ready Standards for Mathematics and English/Language Arts was adopted and initiated based on the CCSSI; this is commonly referred to as the Common Core State Standards; and WHEREAS, relinquishing control of education to the federal government enforces a one-size-fits-all curriculum that ignores cultural differences among individuals and students' educational needs; national standards do very little to address local problems, fail to recognize differences in learning styles, and emphasize rote learning and uniformity over creativity; and WHEREAS, it is desirable for states to return to maintaining sole control over the development, establishment, and revision of K-12 course of study standards without federal control; now therefore, BE IT RESOLVED BY THE LEGISLATURE OF ALABAMA, BOTH HOUSES THEREOF CONCURRING, That we strongly oppose the Common Core State Standards Initiative, and urge the United States Congress and President Donald Trump to review and reconsider the requirements of the initiative and to summarily reject it. BE IT FURTHER RESOLVED, That a copy of this resolution be transmitted by the Clerk of the House of Representatives to the President of the United States, President of the United States Senate, Speaker of the United States House of Representatives, and each member of the Alabama Congressional Delegation so that our strong sentiments concerning this matter are known.