Who is Mo Brooks? 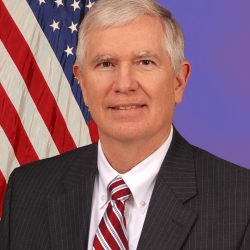 Mo is currently serving Alabama’s 5th Congressional District, the Tennessee Valley of North Alabama. Since his election to the U.S. House of Representatives in 2010, he’s been leading the charge for a sustainable, balanced Federal budget, ending illegal immigration, maintaining a strong national defense, and an economic environment that benefits working American families.

In Congress, Mo serves on the Armed Services, Foreign Affairs, and Science, Space and Technology committees. He co-chairs the Space Subcommittee and is past Chairman of the Research and Science Education Subcommittee. Mo was a founding member of the Freedom Caucus, a group of fiscal and social conservative members.

Growing up in Alabama, it was Mo’s parents who taught him the value of hard work– instilling in him foundational conservative principles from a young age. With his mom as a teacher and his dad as an electrical engineer, his parents expected Mo to study and excel in his pursuits, which he did. After graduating from Grissom High School in Huntsville, Mo attended Duke University, where he graduated in just three years with a double major in political science and economics, with highest honors in economics.

While at Duke, he met Martha and they were married in 1976. They are the proud parents of four children and ten grandchildren.

Mo decided to pursue a career in law, which led him to the University of Alabama Law School. After graduating from law school, Mo worked as a prosecutor in the Tuscaloosa District Attorney’s office, where he built a solid “tough-on-crime” reputation. He obtained guilty verdicts in all of the 20-plus jury trials he prosecuted. He then returned to Huntsville to clerk for presiding Circuit Court Judge John David Snodgrass.

Following his clerkship, Mo decided to practice business law and continue in public service– as an elected official. Mo won election to the Alabama House of Representatives in 1982. At the time, he was just one of eleven Republican legislators (out of 140 total) and the only elected Republican legislator north of Birmingham. He was reelected to the Alabama House in 1983, 1986, and 1990. While in the state legislature, Mo was elected Republican House Caucus Chairman three times and was ranked the number one legislator by the Alabama Taxpayers’ Defense Fund in the fight to protect family incomes from higher taxes. He was also ranked in the top 20% by Alabama Alliance of Business & Industry on pro-jobs, tort reform, and free enterprise issues, and was recognized as one of the legislature’s most effective legislators by Alabama Magazine.

In 1996, he ran for the Madison County Commission, unseated an eight-year incumbent Republican, and went on to win the general election. Mo was reelected to the Commission in 2000, 2004, and 2008.

During his tenure in the legislature and while on the Madison County Commission, Mo held a second job in private legal practice. And Mo “pinch-hit” as a fill-in radio talk show host for WVNN in 1990 until the new host arrived: a skinny kid named Sean Hannity.

Mo Brooks from Huntsville, AL has participated in elections listed below in the state of Alabama.

The below links are relevant to Mo Brooks from Huntsville, AL and are articles or opinion pieces published on Bama Politics. Are you Mo Brooks? Do you have an opinion on Mo Brooks? Publish an article in our opinion section and your article will appear here. A great way for our visitors to find your content and learn more about your views. Use this contact form to find out how.

The below links are relevant to Mo Brooks from Huntsville, AL and were found via our own research or sent to us from readers like you. These links are not associated with Bama Politics.