Who is Jerry Carl? 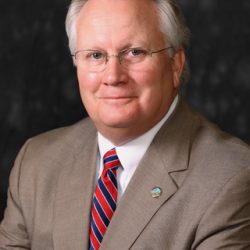 Born in Mobile, Jerry Carl started his first company at 25 and grew that small business into numerous other companies throughout the region. In all, Jerry has started over ten different companies ranging from real estate to healthcare and timber to even the manufacturing of church furniture.

Being an entrepreneur has filled much of Jerry’s time, but nothing could take Jerry away from his wife of over 37 years, Tina. They grew their family with the births of their children and proudly watched each one of them become successful in their own rights. One son became a Marine, another a successful Insurance agent, and their only daughter heard the call to become a teacher. Today, much of their time chasing grandchildren around their family farm.

When Jerry was frustrated with the direction of Mobile’s local government, he ran for County Commission, where he still serves today. Throughout his time on the Commission, he has proven to be a vocal fiscal hawk and advocate for pro-growth, job-creating policies. He abstained from taking a tax-payer-funded salary his first two years in office, consistently votes against raising taxes, and is laser‑focused on creating economic opportunities so good-paying jobs can be created right here in our community.

Like President Trump, Jerry isn’t afraid to make unpopular decisions right for Alabama. As an avid hunter, Jerry is a lifelong supporter of our Second Amendment rights, and as a Christian saved by God’s grace, Jerry believes all human life should be protected from conception.

Alabama’s First District brings together the richness of Alabama and all its beauty. Jerry believes we need strong representation fighting for conservative values in Congress. He’s an outsider, a job creator, and a businessman looking to get things done. He doesn’t take no for an answer and works to find solutions to our problems because that’s how it works in the real world.

Jerry Carl from Mobile, AL has participated in elections listed below in the state of Alabama.

The below links are relevant to Jerry Carl from Mobile, AL and are articles or opinion pieces published on Bama Politics. Are you Jerry Carl? Do you have an opinion on Jerry Carl? Publish an article in our opinion section and your article will appear here. A great way for our visitors to find your content and learn more about your views. Use this contact form to find out how.