Who is Mike Rogers? 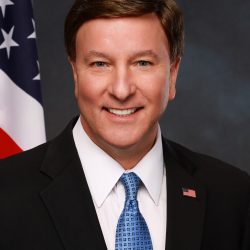 Mike Rogers is a former member of Congress representing Michigan’s Eighth Congressional District and previously served as an officer in the U.S. Army and FBI special agent.

While in Congress, Mr. Rogers chaired the powerful House Permanent Select Committee on Intelligence (HPSCI), where he authorized and oversaw a budget of $70 billion that funded the nation’s 17 intelligence agencies.

In Congress, Mike worked across the aisle with two presidents, Congressional leadership, countless diplomats, military service members, and intelligence professionals to ensure the brave men and women who fight for our nation are equipped with the resources necessary to get the job done. Washington Post columnist David Ignatius remarked that Mike was “a rare example of bipartisanship.”

Today, Mr. Rogers advises C-suite executives from Fortune 100 companies, providing analysis and expertise on the challenges facing companies operating in the digital era, and on cybersecurity and executive leadership.

He currently serves as the Vice-Chairman of the Board at the MITRE Corporation, and as a Director at leading companies including CyberSponse, IAP, and 4IQ. He is currently investing in and helping companies develop solutions for healthcare, energy efficiency and communications challenges.

Mr. Rogers is a Senior Fellow at Harvard University and a member of the Board of Trustees and the David Abshire Chair at the Center for the Study of the Presidency and Congress, where he directs the Center’s national security programs. Mr. Rogers is a regular public speaker on global affairs, national and cyber security, and leadership.

He is also the founder of Leadership to Ensure the American Dream (LEAD). Mr. Rogers is a 1985 graduate of Adrian College. He is married to Kristi Rogers and has two children.

Mike Rogers from Weaver, AL has participated in elections listed below in the state of Alabama.

The below links are relevant to Mike Rogers from Weaver, AL and are articles or opinion pieces published on Bama Politics. Are you Mike Rogers? Do you have an opinion on Mike Rogers? Publish an article in our opinion section and your article will appear here. A great way for our visitors to find your content and learn more about your views. Use this contact form to find out how.