Who is Rick Pate? 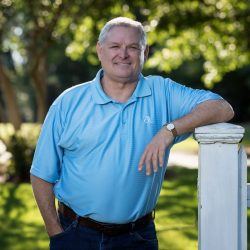 Rick Pate was elected Alabama’s Commissioner of Agriculture and Industries in November of 2018. Under his leadership, the Department of Ag and Industries has administrated several new programs and navigated the challenges that came with COVID-19. From the state’s new hemp program to making sure our food supply was safe, sustainable, and abundant during the pandemic, Commissioner Pate’s leadership contributed to the success of all department challenges.

In addition to his Department duties, Commissioner Pate serves as the Secretary of the Southern Association of State Departments of Agriculture and in 2020 was elected as an RNC delegate and one of the nine Alabama Electoral College electors for former President Donald J. Trump.

Rick Pate grew up working on his family’s cattle and poultry operations in Lowndes County where he learned the value of hard work and perseverance. In 1978, he graduated from Auburn University with a degree in ornamental horticulture and ran a successful landscape business in Montgomery for 38 years. He also owns a purebred cattle operation, Pate Charolais Ranch, in Lowndes County.

As if running a company and being a cattleman was not enough to keep him busy, Pate had been raised with the example that each of us has a responsibility to give back. In 2004, he was elected as mayor of Lowndesboro and served unopposed in that position for 14 years.

Growing up on a farm, running a business, and serving as the mayor of a small rural town has given Rick a unique perspective to bring to the office of Ag Commissioner. He has a genuine concern for the future of agriculture and the rural communities in Alabama and works hard to ensure their success.

Rick has been married to the former Julie Dismukes for 32 years and they have two grown sons, Richard and James.

Rick Pate from Lowndesboro, AL has participated in elections listed below in the state of Alabama.

The below links are relevant to Rick Pate from Lowndesboro, AL and are articles or opinion pieces published on Bama Politics. Are you Rick Pate? Do you have an opinion on Rick Pate? Publish an article in our opinion section and your article will appear here. A great way for our visitors to find your content and learn more about your views. Use this contact form to find out how.