Who is Callie Chenault Waldrep? 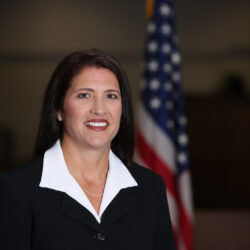 Callie’s roots run deep in Lawrence County. She was born and raised in Moulton. Her grandfather, Pleaz Chenault, and her father, Ray Chenault, owned and operated Chenault Motor Company for more than 40 years in downtown Moulton. Callie’s mother, Barbara Chenault, was a teacher for nearly 30 years in Lawrence County. After selling the car dealership and retiring from teaching, Callie’s parents co-owned and operated Western Sirloin Steakhouse. For the next 18 years, you could find any member of the Chenault family, including Callie, at the steakhouse running the family business. The Chenault's sold their ownership in the steakhouse after the passing of Callie’s father.

Callie graduated from the University of Alabama with her law degree in 2004 and began her career as an Assistant District Attorney. In 2012, after working in the Morgan and Madison County District Attorney’s Offices, Callie came back home to Lawrence County where she currently serves as an Assistant District Attorney. Callie is also the City Attorney and City Prosecutor for the City of Moulton, as well as the Municipal Judge for the Town of Courtland. Throughout her career, Callie has prosecuted or assisted in prosecuting thousands of felony and misdemeanor cases ranging anywhere from minor traffic violations to drug charges to capital murders and everything in between. In 2017, Callie was instrumental in rescuing and securing custody of an elephant named Nosey. Nosey, who had already made national headlines for years due to her deplorable living conditions, would again make national headlines when she was rescued and transported to the Tennessee Elephant Sanctuary, where she has been living ever since.

Callie’s husband, Chris, currently serves as Lawrence County’s Emergency Management Agency Director. Prior to this appointment, Chris was a Captain with the Lawrence County Sheriff’s Office and served the citizens of Lawrence County as a law enforcement officer for over twenty years. Callie and Chris have three children, Max (8), Rebecca (11) and Peyton (17) who all attend school in Lawrence County. Callie’s family attends Liberty United Methodist Church. In addition to being a full-time employee, wife and mom, Callie serves on the Children’s Policy Council, which advocates for and addresses the needs of the children and youth in Lawrence County. She is also a member of the Rotary Club of Lawrence County, the Moulton Lions Club, the National Wildlife Turkey Federation and is an active participant in the Lawrence County Republican Party.

Callie Chenault Waldrep from Moulton, AL has participated in elections listed below in the state of Alabama.