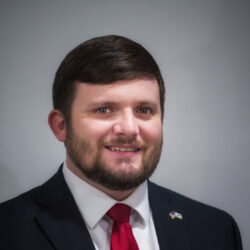 Cameron Elkins has local roots to the Shelby County community. He grew up in Pelham. He is a current resident of Helena and member of the Church at Old Town in Helena. He is a longtime member of the Alabama Republican Party. He is married to Bethany Elkins who is a child trauma therapist. They met during Cameron's time at the District Attorney's Office. Bethany was a therpaist and forensic interviewer at a Child Advocacy Center working with child victims.

Cameron started his career working for the Chairman of the House Financial Services Committee on Capitol Hill in Washington D.C. before deciding to pursue a legal career.

Cameron's legal experience, dedication to the community and advocating for the victims of crime started early in his career. For two years he worked with the Shelby County District Attorney's Office in Memphis, TN. He was assigned to the Domestic Violence Special Prosecution Unit and the Community Special Prosecution Unit. He worked in one of the busiest District Attorney offices in the country. While there he learned, was trained and helped prepare hundreds of cases spanning from violent felonies to simple misdemeanors. He trained with some of the best attorneys in the country operating in one of the most violent areas of the country.

After his time at the Shelby County District Attorney's Office, he returned back to Alabama to further pursue a career in Criminal Law. He was hired by the District Attorney's Office for the 19th Judicial Circuit. While there he was responsible and tried numerous cases from felonies, misdemeanors, juvenile and traffic cases. He quickly was promoted to Senior Assistant District Attorney for Chilton County. He would work with officers from his circuit in proper training for searches and seizures and preparation to testify in court. He even assisted in training new officers at the police academy.

Cameron W. Elkins from Helena, AL has participated in elections listed below in the state of Alabama.

The below links are relevant to Cameron W. Elkins from Helena, AL and are articles or opinion pieces published on Bama Politics. Are you Cameron W. Elkins? Do you have an opinion on Cameron W. Elkins? Publish an article in our opinion section and your article will appear here. A great way for our visitors to find your content and learn more about your views. Use this contact form to find out how.