Who is Charles Taylor? 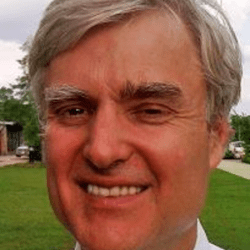 Charles L. H. Taylor (53) was born July 20, 1956, in Mobile Infirmary. His parents Buck and Virginia (Hybart) Taylor are from Mobile and Monroeville respectively. His paternal Grandfather (W. B.) was postmaster of Mobile IN 1940s AND 50s after his bank closed. His great Grandfather (R. V. Taylor) was mayor of Mobile in 1918, 1922, 1926 and 1936. His Grandmother Mrs. Marion Hybart was the first president of the Women’s Student Association of the University of Alabama in the 1920s.

Charles has a degree in marketing from Auburn University in 1979. He was Vice President of the Marketing Club and Chaplain of the Phi Delta Theta fraternity. He graduated with a 3.25 GPA

His sports included Tinymite football as a fullback for Hannon Park. He was known to score on a play, straight up the middle. (#32) In One game he scored 3 times. He didn't know that a few years later his wife-to-be would be living on Mack Street, 50 yards from the end zone at Sage Park where he scored his 3rd touchdown on a 60-yard play.

Later he played in golf tournaments around the state. He was known as a good chip and putter. He was 2nd in 10 and under in 1967 in Dothan Future Masters, shooting a 42 over 3 days.

Taylor has been in construction as a manufacturer's sales rep for over 25 years. The Rep. company (Buck Taylor Manufacturers Sales) has won numerous sales awards. It was started in 1954 by his father.

Taylor became a born-again Christian on Friday night September 22, 1978, in Auburn Student Union in a Campus Crusade meeting. He was asked by his friend Kenny Wells to attend. Later he received Baptism of the Holy Ghost speaking in other tongues at a New Life Center men's Saturday morning prayer meeting in Auburn in November 1978 at an apartment complex meeting room.

He now attends the Church of His Presence in Daphne. Taylor has traveled to many countries on all continents on mission trips. He is a member of the Mobile Country Club.

He has voted Republican and helped Pat Robertson's campaign and was a poll watcher for Fob James in 1994.

Taylor was married nineteen years to the former Rhonda Lynn McDuffie of Mobile. After a divorce in 2001, she remarried in 2006 (Rhonda Naylor). She died on March 1, 2007.

He, William, and Alice live in Historic Malbis Village in Daphne.

Charles Jr. a Forrester is a Daphne resident, Duffie will be leaving with the Peace Corps to Africa this spring.

William attends Troy University and Alice attends Spanish Fort High School where she is a cheerleader.

Charles Taylor from Daphne, AL has participated in elections listed below in the state of Alabama.

The below links are relevant to Charles Taylor from Daphne, AL and are articles or opinion pieces published on Bama Politics. Are you Charles Taylor? Do you have an opinion on Charles Taylor? Publish an article in our opinion section and your article will appear here. A great way for our visitors to find your content and learn more about your views. Use this contact form to find out how.