Who is Chris Christie? 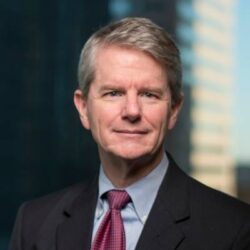 Chris Christie is a candidate for Jefferson County Circuit Judge, Birmingham Civil Division, Place 21. Chris's legal career spans more than 34 years, equipping him with the skills and experience to serve on the bench. His commitment to fairness, compassion, and equal justice make him the best choice.

Chris currently practices with Dentons Sirote’s Litigation Practice Group. From 1988 to 2018, he worked as a trial lawyer at Bradley Arant Boult Cummings LLP. In addition to his regular practice at Bradley, he served as chair of the firm's Pro Bono Committee for over 20 years and personally represented death row inmates, abused prisoners, and others unable to afford a lawyer.

Chris has been recognized in "The Best Lawyers in America" publication every year since 2005 and Super Lawyers selected him in 2017 as a Top 50 Attorney in Alabama. He is frequently asked to speak and publishes on employee benefits, healthcare law, legal ethics, and trial techniques.

Chris is an active member of the Alabama State Bar Association, where he has for years served on the Diversity & Inclusion Committee and the Pro Bono Committee. He is also a Fellow with the Birmingham Bar Foundation and a past President of the Legal Aid Society of Birmingham.

Chris has been deeply involved in community and public service going back to his time as Peace Corps Volunteer in Cameroon, Africa, from 1985 to 1987. He served as Chair of the Board for the American Diabetes Association of Alabama and has been a committed volunteer with numerous charitable organizations, including Big Brothers Big Sisters, John Croyle's Big Oak Ranch, Homewood Parks and Recreation, Shades Valley YMCA, UAB Center for Palliative and Supportive Care, and the Old Firehouse Shelter.

A devoted family man, Chris has been married for over thirty-seven years to Donna Christie. They are the proud parents of three adult children and recently became new grandparents. Chris has served his church congregation, Homewood Cumberland Presbyterian Church, as an Elder, Sunday School teacher, and Bible Study leader for over 30 years.

Chris Christie from Birmingham, AL has participated in elections listed below in the state of Alabama.

The below links are relevant to Chris Christie from Birmingham, AL and are articles or opinion pieces published on Bama Politics. Are you Chris Christie? Do you have an opinion on Chris Christie? Publish an article in our opinion section and your article will appear here. A great way for our visitors to find your content and learn more about your views. Use this contact form to find out how.