Who is Corey Martin? 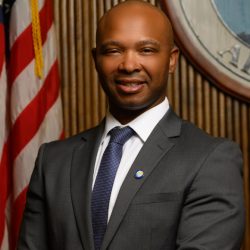 Corey Martin is serving his first term on the City Council. Corey and his lovely wife, Monetia have three children: Corey, Bryon, and Zoe. They attend Fairhope schools. His family attends Celebration Church, where Corey serves as a financial advisor on the board. Corey, a multi-faceted athlete, graduated from Davidson High School in Mobile AL. He accepted a baseball scholarship to Samford University where he earned a Bachelor of Science in Exercise Physiology. He obtained a Nursing degree from Jefferson State Community College in Birmingham. As a Registered Nurse, Corey worked in ICU with a specialty in Trauma and Burn. He worked as a traveling nurse in California, Arizona, New Jersey, Pennsylvania, and Alabama. After earning a Master of Science in Anesthesia from Midwestern University, Corey began his career as a Nurse Anesthetist. He practiced at the University of Florida Shands Hospital in Gainesville and Providence Hospital in Mobile. Corey has a strong legacy in education, sports and supporting others. His mother taught special education and retired as the Director of Special Education in Mobile County. His father taught special education, coached various high school sports, and mentored young men. Corey’s grandmothers were educators, and his uncle was one of the first black principals in Mobile.

Corey’s passion for sports and supporting others inspired him to devote his time to serving the youth of Fairhope. Just as he received blessings from his family, he believes in passing the torch to the next generation. In 2017, Corey saw the need to give boys (ages 9-14) an equal opportunity to become well-rounded young men. As a result, he founded Lampro Asteri, a 501(c)(3) mentorship program, locally known as the Fairhope Boy’s Club. Each week, you will find Corey at Fairhope Intermediate School and Fairhope Middle School, teaching 60-75 boys leadership skills and the habits of successful people. His goal is to create future leaders of Fairhope by preparing the boys to be mentally, physically, and spiritually healthy men. Corey Martin serves on several boards within the community: Fairhope Educational Enrichment Foundation FEEF (3 years), Rotary Youth Club (4 years), City Recreation Board (2 years) and Celebration Church as Financial Advisor (4 years).

Corey Martin from Fairhope, AL has participated in elections listed below in the state of Alabama.

The below links are relevant to Corey Martin from Fairhope, AL and are articles or opinion pieces published on Bama Politics. Are you Corey Martin? Do you have an opinion on Corey Martin? Publish an article in our opinion section and your article will appear here. A great way for our visitors to find your content and learn more about your views. Use this contact form to find out how.