Who is Danny Peters? 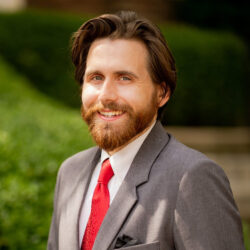 Danny Peters has always been drawn to serve. Upon graduation from the United States Naval Academy, he was commissioned as an officer and traveled the globe executing a diverse mission. With the Navy, he participated in counter-narcotics campaigns across Latin America, planned and executed multi-national exercises in and around Japan, and oversaw the operations of a global satellite computer network as well as expanded capabilities with hundreds of cyber security projects.

After a rewarding Naval career, Danny accepted an opportunity as an engineer for a nationwide general contractor in their DC area office. This involvement with the built environment introduced him to all the nuances of large infrastructure projects. This firm entered the Huntsville market with the construction of the FBI Headquarters on the Arsenal. When Danny and his wife, Ashley, moved to Huntsville they immediately knew this is where they wanted to stay. While they may not have been lucky enough to be born in Huntsville they have wholeheartedly decided to make it their forever place. They purchased their first home and finally felt the sense of community that was lacking from their days of constant moves.

Ashley is a small business owner in Huntsville, and Danny is involved with local groups such as the Huntsville Urban Bike Share Co-op as well as the Huntsville Environmental Coalition. He has been an avid supporter of ensuring mobility accessibility and sustainable growth for Huntsville since he moved here. When Danny's firm was looking to relocate them out of Huntsville they made the choice to stay. This is their home, this is their community.

Danny and his wife are high school sweethearts, they love to spend their free time hiking the many trails around Huntsville with their two rescue pups, Bently and Fredrik. They also love breathing new life into old discarded furniture to promote sustainability. They are both avid gardeners dedicating a large portion of their yard to organically growing some of their own produce. Thanks to Huntsville Danny has recently picked up the sport of Disc Golf and competed in his first-ever tournament, the Rocket City Blast.

Danny Peters from Huntsville, AL has participated in elections listed below in the state of Alabama.

The below links are relevant to Danny Peters from Huntsville, AL and are articles or opinion pieces published on Bama Politics. Are you Danny Peters? Do you have an opinion on Danny Peters? Publish an article in our opinion section and your article will appear here. A great way for our visitors to find your content and learn more about your views. Use this contact form to find out how.

The below links are relevant to Danny Peters from Huntsville, AL and were found via our own research or sent to us from readers like you. These links are not associated with Bama Politics.