Who is Darrio Melton? 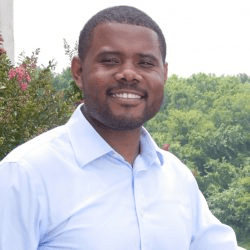 Darrio grew up right in the heart of District 23, in Selma's GW Carver homes, in a tight-knit family with his mother, grandmother, and sister, Joi. His family, coaches, and teachers taught him about the importance of community, especially in the loss of his sister, so Darrio always knew Selma would be his home.

That emphasis on community is why Darrio moved back to the Black Belt after he graduated college and earned his master's degree. He married his high school sweetheart, Christi, and they came home so they could raise their two children in the community they've always been proud to call home.

Darrio was elected to two terms in the Alabama House of Representatives, earning the title of 2013 Legislator of the Year for his ability to get results for Dallas and Perry counties. During his time in the Legislature, he sponsored numerous voting rights bills and spearheaded the effort to raise the minimum wage and expand Medicaid.

In 2016, Selma called Darrio home from Montgomery, electing him to lead as Mayor. Now, he's ready to roll up his sleeves and work for the larger community in the State Senate, where Democrats desperately need fighters to lift our voices and push for what's right.

Darrio Melton from Selma, AL has participated in elections listed below in the state of Alabama.

The below links are relevant to Darrio Melton from Selma, AL and are articles or opinion pieces published on Bama Politics. Are you Darrio Melton? Do you have an opinion on Darrio Melton? Publish an article in our opinion section and your article will appear here. A great way for our visitors to find your content and learn more about your views. Use this contact form to find out how.