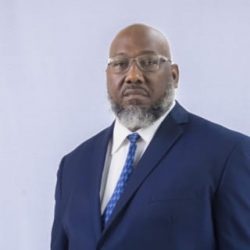 I was born and raised in Anniston, Alabama. I grew up on West 15th Street, three houses up from the Cooper Homes Projects I went to All Saints Elementary, Cobb Jr. High and Anniston High School. After graduating from high school, I graduated from Grambling State University, located in Grambling, Louisiana. I am currently employed with BAE Systems, Inc., located on Coleman Road in Anniston at our VUOC campus, as a Materials Planner. Prior to BAE Systems, I spent 11 years at Bridgewater Interiors. My duties/titles included Production Team member, Materials Analyst, Master Scheduler and Sr. Materials Analyst. Also, for the last ten Friday nights during football season, I have served as the Public Address Announcer for the Anniston Bulldogs.

During my elementary school years, I was exposed to working with the public. My grandfather was the operator of a laundromat and convenience store, D & N Grocery & Laundromat (aka Mrs. O’Neal), located next to Union Foundry (Tyler Union and Boozer Beam). My grandmother was the co-owner/operator of Community Concessions, also known as “The Game Room”. The game room was located on 15th Street & Kelley Avenue, across for Cooper Homes Projects. During my high school years, I was the starting center for Anniston High’s 1989 State Championship Team, “15 TRIED 15 DIED”. Also, during my high school years, I received my first taste of politics. I served as vice president of the Mount Calvary Baptist Church Youth Department and president of the West Anniston Youth Council. As president of the West Anniston Youth Council, I got to work closely with the late “Great” Rev. John S. Nettles and the Project Pay.

During my five years at Grambling, I worked for Coach Eddie G. Robinson’s personal and football secretaries. I was elected president of the Computer Information Systems Club twice. I was elected vice president of the NABA Club (National Association of Black Accountants). I was also a founding member of the Alabama Club. Upon graduating in May of 1995, from Grambling State University, with a B.S. Degree in Accounting & B.S.Degree in Computer Information Systems (double major), I decided to return to Anniston and help my mother raise my niece and 4 nephews. I was taught family first. Therefore, I do not regret, nor would I change a thing. I have truly been blessed. With 5 kids in the Anniston City Systems, I became known as “Uncle DD” to most of the teachers and administrators. I also worked as a substitute teacher during the 1998-1999 school year.

Demetric "D.D" Roberts from Anniston, AL has participated in elections listed below in the state of Alabama.