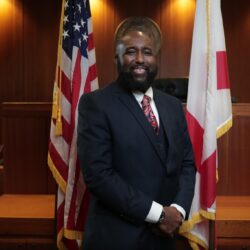 Eric Hamilton is a candidate for Jefferson County Circuit Court Judge in the Criminal Division. With more than 18 years experience as a practicing attorney and 8 years in law enforcement, Eric's career has prepared him to serve as our next Judge.

From 2013 to 2016, Eric served as the first African American Assistant District Attorney in Walker County, Alabama. In this role, he managed dockets in both Circuit and District Court and was specially assigned to prosecute all drug cases as well as all arson cases. He presented cases to the Grand Jury, managed youthful offender application hearings, assisted with victim meetings, and screenings of felony warrants.

Prior to his work in the District Attorney's offices, Eric founded and managed his own law firm for 10 years. He represented criminal defendants and became well versed in jury selection, legal research, witness preparation, and litigation.

He also spent 3 years as an Alabama State Probation & Parole Officer and 5 years as a Police Officer in the City of Birmingham. He participated in hundreds of crime scene investigations, prepared cases for trial, and testified in court as a witness.

Eric's broad range of experience within our criminal justice system helped him to develop a patient and compassionate approach to working with people from all walks of life. He takes a fair and balanced approach to administering the law and perseveres even in the most elusive and difficult cases. He has the experience and temperament needed to preside as Judge on the Criminal Court bench.

Eric is also a graduate of the National Criminal Defense College and earned his certification as Fire Investigator from the Alabama Fire College. He is a member of the Alabama State Bar Association and the Birmingham Bar Association.

Having served in ministry for almost 20 years, Eric currently pastors at Lee Chapel AME Church in Jefferson County's Edgewater community. During the COVID-19 pandemic, he volunteered as a virtual mentor to young men in need of support.

Eric and his wife Erica have been married for 19 years. They are proud parents of Elexandria, Montanna, and Zac. Their granddaughter, Kaliyah, is 16 months old.

Eric Hamilton from Birmingham, AL has participated in elections listed below in the state of Alabama.

The below links are relevant to Eric Hamilton from Birmingham, AL and are articles or opinion pieces published on Bama Politics. Are you Eric Hamilton? Do you have an opinion on Eric Hamilton? Publish an article in our opinion section and your article will appear here. A great way for our visitors to find your content and learn more about your views. Use this contact form to find out how.