Who is Greg Cook? 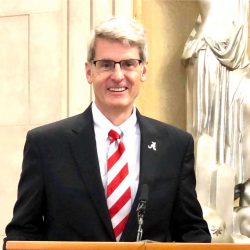 Greg Cook grew up in Florence, Alabama. From an early age, his parents instilled in him faith, the value of hard work, and the importance of service. Inspired by President Ronald Reagan, it didn’t take long for Greg to discover his passion for the conservative, optimistic principles of President Reagan’s shining city on a hill.

After high school, Greg attended Duke University on an Air Force ROTC scholarship and then served our country in the Air Force, reaching the rank of Captain. In 1988, Greg was admitted to Harvard Law School where he worked on the Federalist Society’s Journal of Law and Public Policy alongside future Supreme Court Justice Neil Gorsuch.

After finishing law school, Greg moved back to Alabama to begin practicing law in Birmingham. Over the next three decades, Greg established himself as a strong and active member of the Republican Party. In 2000, he served as volunteer attorney for the Bush vs. Gore legal battle in Florida, where Greg helped supervise the hand recounting of the famous hanging-chad ballots. Locally, Greg served on the Jefferson County Republican Steering Committee, Executive Committee, and as Legal Counsel to the Jefferson County GOP. Greg has also served on the Alabama Republican Party for almost 15 years including the past 4 years as General Counsel for the Alabama Republican Party.

During his nearly 30 years of service to the Republican Party, Greg has tried election law cases, conducted a recount and handled election disputes in numerous counties across Alabama (beginning in 1992). As general counsel, he is the party’s lead attorney and a member of the Alabama Republican Party Steering Committee. In 2020, Greg was elected as a delegate for President Trump to the Republican National Convention and selected to serve on the Credentials Committee at the convention.

Greg has been married to his wife Kimberly for 32 years. They have three children: Geoffrey, Mary Catherine, and Will. Greg and Kimberly have faithfully attended Dawson Baptist Church for the past 30 years, where Greg was ordained as a Deacon and has served as a youth Sunday School leader for over 20 years.

Greg also gives back to his community by volunteering his time with several local non-profit organizations including the United Way and the Boy Scouts including both in his local troop and as an officer for the Greater Alabama Council. He has received numerous Boy Scout awards.

Greg Cook from Vestavia Hills, AL has participated in elections listed below in the state of Alabama.

The below links are relevant to Greg Cook from Vestavia Hills, AL and are articles or opinion pieces published on Bama Politics. Are you Greg Cook? Do you have an opinion on Greg Cook? Publish an article in our opinion section and your article will appear here. A great way for our visitors to find your content and learn more about your views. Use this contact form to find out how.