Who is Hunter Williams? 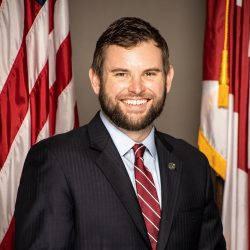 I was born and raised in Birmingham where I grew up in the Crestline neighborhood. From early on Birmingham has been a special place to me - a place that has shaped me and shown me the meaning and importance of community and overcoming adversity.

I attended Southern Methodist University in Dallas, TX where I earned a degree in Finance.

After graduation, I found my way back home to Birmingham. I knew I wanted to find a way to give back to the city that raised me. I began to serve throughout Birmingham through many civic and non-profit organizations such as Rotaract, the American Cancer Society and Cornerstone Schools of Alabama. I also became the neighborhood president for Crestline, the neighborhood I grew up in. During my time as neighborhood president, I was able to partner with residents and community leaders to strategically address and identify opportunities to improve commercial and community development. Connecting with my neighbors and other Birmingham residents on this level deepened my sense of community and showed me the impact that effective, efficient and progressive leadership can have on our entire city, not just a small portion of it.

Professionally, I have served in many different capacities. In 2010 I graduated from the Jefferson County Sheriff’s Academy and have served as a Sergeant in the Reserve Unit’s Uniformed Patrol Division. As a part of my work with the Jefferson County Sherriff’s Office, cohesion between all law enforcement agencies in the metro area was, and still is, one of my main goals. Additionally, I am the first APOST certified Law Enforcement Officer to ever chair the Public Safety Committee for Birmingham City Council. I also founded a small company that provides medical support and surgical risk mitigation services to local hospitals. While each of these professions allowed me to serve and make Birmingham better in some way, I knew that I could be a part of a larger voice to advocate for equality, transparency and the enhancement of quality of life for Birmingham citizens by running for political office. So, I began my campaign for the District 2 Council seat in 2016.

During my campaign, I got to know fellow Birminghamians from all walks of life. I learned of their experiences—good and bad—as well as their hopes for the future of our city. Since winning my 2017 election, I have been entrusted by our residents to push Birmingham forward. I will continue to fight for equality and to create opportunities for all Birmingham citizens, no matter their neighborhood. In my first four years in office, I have had the opportunity to be a part of a momentum I have never witnessed in my life toward the betterment of our city, and I am excited to see how much more we can accomplish over the next four years.

Hunter Williams from Birmingham, AL has participated in elections listed below in the state of Alabama.

The below links are relevant to Hunter Williams from Birmingham, AL and are articles or opinion pieces published on Bama Politics. Are you Hunter Williams? Do you have an opinion on Hunter Williams? Publish an article in our opinion section and your article will appear here. A great way for our visitors to find your content and learn more about your views. Use this contact form to find out how.