Who is J. Wayne Trawick? 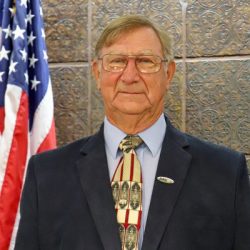 Wayne Trawick has served on the Foley City Council since 1998 and currently serves as the council president.

Trawick graduated from Baldwin County High School in 1966, when he joined the Army National Guard. He served until 1972.

For the last 50 years, Trawick has been self-employed in Foley. In 1970 he became the owner/operator of the Western Auto Associate Store in Foley. Beginning in 1978 and continuing to today, Trawick has been involved with multiple building and development projects. He is the president of Trawick Builders Inc., focusing on building and remodeling residential, commercial and industrial, and Baldwin Pools Inc., which focuses on building commercial and residential pools.

Trawick has been a member of the South Baldwin Chamber of Commerce since 1971. From 1994 – 2000, as a member of the Baldwin County Home Builders, he served as national director, state director, director and president. He served on the Bancorp Board of Directors from 2007 – 2008.

He has been married to Celia Craig Trawick for 52 years. Together they have two sons and four grandsons.

J. Wayne Trawick from Foley, AL has participated in elections listed below in the state of Alabama.

The below links are relevant to J. Wayne Trawick from Foley, AL and are articles or opinion pieces published on Bama Politics. Are you J. Wayne Trawick? Do you have an opinion on J. Wayne Trawick? Publish an article in our opinion section and your article will appear here. A great way for our visitors to find your content and learn more about your views. Use this contact form to find out how.