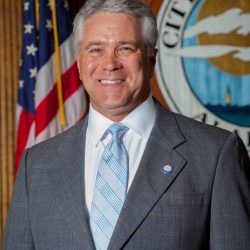 Jack Burrell is serving his third term in office, having served his first eight years as President of the Fairhope City Council. In less than four years, he attained the Advanced Certified Municipal Official designation by the Alabama League of Municipalities. Jack is the son of the late Shirley and Ode Burrell. His late mother retired as a public school teacher having taught school for over 25 years. His late father also retired from a lengthy teaching and coaching career, following six years as a standout professional football player for the Houston Oilers. Councilman Burrell attributes much of his success to both of his parents as they taught him the meaning of “hard work” and to “always do your best."

Jack graduated from Vancleave High School (Vancleave, MS), where he was elected Senior Class President and “Most Likely to Succeed”, while lettering in football, baseball, basketball, and golf. Following high school, he attended Mississippi State University on a Shields Engineering Scholarship. Jack was also a sprinter on MSU’s varsity track team while earning a Bachelor of Science degree in Aerospace Engineering. He was elected to the MSU Engineering Student Hall of Fame in 1987.

Following college graduation, he worked his way up to a Lead Engineering position with Teledyne Brown Engineering, Huntsville, Alabama, where he worked on the Space Shuttle program for NASA. He currently serves in the role of Principal Aerospace Engineer for i3 Corporation, where he is responsible for various tasks for NASA, the Department of Defense and the U.S. Armed Forces. In addition to his duties with i3, Jack operates a successful small rental property business.

Having visited Fairhope many times as a young man, Councilman Burrell knew he was going to one day live and retire here. That dream to live in Fairhope became a reality when he and his wife, Patti, relocated to Fairhope 22 years ago. Jack and Patti have two children who both graduated from Fairhope High School. Over the past two decades, Jack has lent his time and talents to many local organizations. Jack is past president of the Fairhope Educational Enrichment Foundation (FEEF) Board of Directors, an active member of the Fairhope United Methodist Church, a member of the Fairhope Pirate Booster Club and broadcaster for PirateNationLive. He is also a member of the Eastern Shore Sertoma Club and the Senior Bowl Committee. Jack also represents the Fairhope City Council on the Fairhope Airport Authority, and the Fairhope Industrial Development Board, and serves as Vie-Chairman of the Eastern Shore Metropolitan Planning Organization.

Jack Burrell from Fairhope, AL has participated in elections listed below in the state of Alabama.

The below links are relevant to Jack Burrell from Fairhope, AL and are articles or opinion pieces published on Bama Politics. Are you Jack Burrell? Do you have an opinion on Jack Burrell? Publish an article in our opinion section and your article will appear here. A great way for our visitors to find your content and learn more about your views. Use this contact form to find out how.