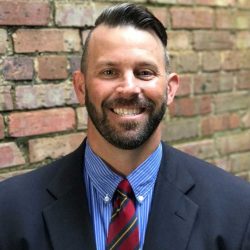 Commissioner James E. (Jeb) Ball is a life-long resident of Baldwin County and lives in Bay Minette with his wife Allison and their daughter.

Commissioner Ball is a graduate of Baldwin County High School in Bay Minette and of the Troy State University in Troy, Alabama, where he was a member of the Pi Kappa Phi Fraternity.

While in college, during summer breaks Commissioner Ball was a helper for the Baldwin County Board of Education, assisting the Board with carpentry and remodeling projects. After graduating college, he worked for the Baldwin County District Attorney’s Office as an Environmental Investigator and Criminal Trial Coordinator. In 1997 he took a job with Baldwin Court Services serving as a Court Referral Officer for ten years. In 2007 he started Baldwin Substance Services, Inc. Since 2007, he serves as the Program Director and an Educational Instructor for the Court Referral Education Programs that serve Baldwin County.

A Republican, Commissioner Ball is currently serving his first term on the Baldwin County Commission.

James E. "Jeb" Ball from Bay Minette, AL has participated in elections listed below in the state of Alabama.

The below links are relevant to James E. "Jeb" Ball from Bay Minette, AL and are articles or opinion pieces published on Bama Politics. Are you James E. "Jeb" Ball? Do you have an opinion on James E. "Jeb" Ball? Publish an article in our opinion section and your article will appear here. A great way for our visitors to find your content and learn more about your views. Use this contact form to find out how.