Who is James Lomax? 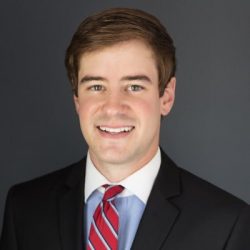 James has dealt with economic development in Huntsville firsthand. Since joining his current company, he has been responsible for the development of over 1,000,000 square feet of office space for local businesses to use to continue growing their companies and bring more jobs to North Alabama, while investing real dollars into the region. James is dedicated to fighting to make Alabama the best state in America to do business in. His business experience, passion for Alabama, and history of standing up for conservative principles create the unique mixture of a leader that Alabama needs in the State House.

Most importantly, James is committed to his local community. His involvement doesn't just stop within the local Republican party. James has been a member of the Huntsville Rotary Club since 2019. Additionally, he served as President of the Rotaract Club of Huntsville from 2015 until 2017. James has been a finalist for the Chamber of Commerce Young Professional of the Year consistently since 2017, and he was proud to be a nominee for the Leukemia & Lymphoma Society Man of the Year in 2015.

James is a dedicated Conservative Republican who truly knows what it takes to recruit business, grow our economy responsibly, and fight to preserve our Alabama values. He is excited to earn your support and will not be outworked as he campaigns for the Republican Primary on May 24, 2022.

James Lomax from Huntsville, AL has participated in elections listed below in the state of Alabama.

The below links are relevant to James Lomax from Huntsville, AL and are articles or opinion pieces published on Bama Politics. Are you James Lomax? Do you have an opinion on James Lomax? Publish an article in our opinion section and your article will appear here. A great way for our visitors to find your content and learn more about your views. Use this contact form to find out how.