Who is Jay Jones? 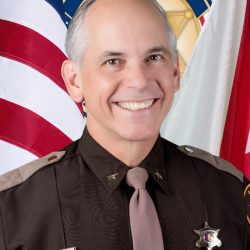 Sheriff Jones began his law-enforcement career with the Lee County Sheriff’s Office in 1975 while a student at Auburn University.

His first work assignment was in the jail as a corrections officer/communications operator and was later appointed to a road position as a sworn deputy sheriff. He has experienced all aspects of the operations of the Sheriff’s Office, moving up in the ranks through the years and was eventually appointed as the Sheriff’s Office Chief Investigator in command of the Investigations Division.

His professional affiliations include serving as a governor’s appointee to the Advisory Committee on Women in Criminal Justice, the Alabama Crime Victim’s Compensation Commission, the Alabama Local Government Records Commission and the Alabama Peace Officers Annuity and Benefit Fund board.

He currently serves as a board member for the Lee County Youth Development Center, the Bennie Adkins Foundation, the Opelika Chamber of Commerce and the Lee County Emergency Communications District.

Along with his public safety duties Sheriff Jones has also served as an adjunct instructor of Criminal Justice at Auburn University and Southern Union Community College in Opelika, AL.

The below links are relevant to Jay Jones from Opelika, AL and are articles or opinion pieces published on Bama Politics. Are you Jay Jones? Do you have an opinion on Jay Jones? Publish an article in our opinion section and your article will appear here. A great way for our visitors to find your content and learn more about your views. Use this contact form to find out how.