Who is Jesse Smith? 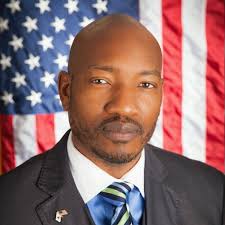 Born June 1974 in Albany, Georgia, along with an older brother and a younger sister, Jesse’s grandparents raised him in Holly Holmes Public Housing in southwest Albany. He attended Westover High School, where, during his freshman and sophomore years, he was a member of The Patriots varsity basketball team and the band. The summer of 1992 presented an opportunity for him to escape the clutches of poverty and life in the projects. Prior to starting his junior year at WHS, he moved to Washington D.C. to live with relatives. In 1993 he graduated as a junior from F.W. Ballou Senior High School in Washington D.C.

Jesse, determined and ambitious, enlisted in the United States Army in March 1995. Upon completion of basic training, he quickly deployed into action serving two tours in Bosnia supporting both Operations’ Joint Endeavor & Joint Guard. After successful completion of those assignments, he served back-to-back tours in Germany in conjunction with two combat tours in support of Operation Iraqi Freedom I and III, where he was among one of the first convoys to enter Tikrit Iraq prior to the capture of Saddam Hussein.

He displayed exemplary leadership skills, which did not go unnoticed, and in March 2003 he was inducted into the Sergeant Audie Leon Murphy Leadership Club. This highly regarded achievement is only bestowed upon the top 2% of Enlisted Army leaders. Additionally, a nomination by his superiors resulted in his selection to attend the prestigious U.S. Army Sergeants Major Academy where he graduated from the Battle Staff Non-Commissioned Officers Course with superior ratings.

On December 1, 2008, after serving nearly 14 years on active duty, he was honorably discharged from the military. He then chose a career path in which he continued to serve his nation as a federal civil service employee at the Department of the Army Combat Readiness/Safety Center. He served as an Accident Investigator (Fatality Division) & Tactical Occupational Safety & Health Manager for the Army Brigade Combat Teams.

The tradition of service to the country is very evident in his family life as he is married to U.S. Army Captain Carla Smith and they are proud parents of 5 children: Darius, Jesse II, Latiffany Mykia (Specialist, U.S. Army), Jermonte (Petty Officer, U.S. Navy).

While skillfully serving our nation in many capacities, his leadership traits have served him well and position him to lead a Charge For Change in Washington D.C., representing Alabama’s 3rd Congressional District.

Jesse Smith from Phenix City, AL has participated in elections listed below in the state of Alabama.

The below links are relevant to Jesse Smith from Phenix City, AL and are articles or opinion pieces published on Bama Politics. Are you Jesse Smith? Do you have an opinion on Jesse Smith? Publish an article in our opinion section and your article will appear here. A great way for our visitors to find your content and learn more about your views. Use this contact form to find out how.