Who is Jessica K. Sanders? 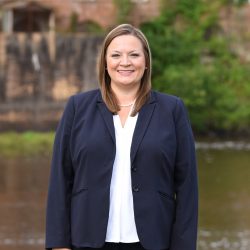 Her legal career continued with her appointment as an Assistant Attorney General where she represented the state and members of the Alabama Law Enforcement Agency in courts across the state and in both state and federal courts.

Jessica continued her dedication to public service by joining the Alabama Legislature as a legislative attorney, and for the past three years, she has served as Assistant Attorney General and Government Affairs Director for the State Department of Education.

Jessica will bring the experience she gained from working within the judicial system for Autauga, Elmore, and Chilton counties and from representing the state and Alabama's K-12 students to serve all the citizens of the 19th Circuit.

Jessica's extensive circuit court experience has more than prepared her to serve our communities as a Circuit Judge, and she promises to bring her conservative values, work ethic, honor, and integrity to serve as a judge.

Jessica has been married to her husband Russ for 17 years. Russ currently serves as the Assistant Parks and Recreation Director for the City of Prattville. Jessica and Russ attend the Prattville Church of Christ and are active members of the Prattville Lions Club.

Jessica K. Sanders from Prattville, AL has participated in elections listed below in the state of Alabama.

The below links are relevant to Jessica K. Sanders from Prattville, AL and are articles or opinion pieces published on Bama Politics. Are you Jessica K. Sanders? Do you have an opinion on Jessica K. Sanders? Publish an article in our opinion section and your article will appear here. A great way for our visitors to find your content and learn more about your views. Use this contact form to find out how.