Who is Jim Toomey? 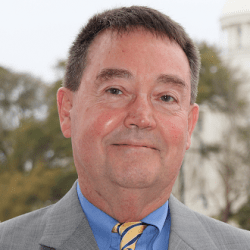 Jim is a native Alabamian. He grew up in Mobile and graduated from Vigor High School. Jim graduated from Southwest State Technical Institute in Mobile where he studied Information Technology. He continued those studies at the University of South Alabama.

Jim is an active community volunteer, serving on several non-profit boards, and volunteering at a local United Way agency. He was a member of the Rotary Club service organization for many years including service as a chapter president. He is now a member of the Lion's Club service organization. He is very active in his church, both at the local level and serving as Moderator of the Presbytery of Sheppards and Lapsley.

Jim and his wife Brenda will celebrate their 53rd wedding anniversary in 2022. They have 3 children; Leslie Stephenson, who teaches at Chelsea High School; James Toomey, who is a veterinarian at Southern Research in downtown Birmingham; and Rachael Schexnailder, who is an attorney serving the public at the Jefferson County Public Defenders office. Jim and Brenda have 9 amazing grandchildren.

Jim Toomey from Vestavia Hills, AL has participated in elections listed below in the state of Alabama.

The below links are relevant to Jim Toomey from Vestavia Hills, AL and are articles or opinion pieces published on Bama Politics. Are you Jim Toomey? Do you have an opinion on Jim Toomey? Publish an article in our opinion section and your article will appear here. A great way for our visitors to find your content and learn more about your views. Use this contact form to find out how.