Who is Jimmy Conyers? 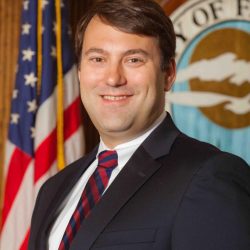 Jimmy Conyers, Council President, is serving his second term on the Fairhope City Council. A native of Atlanta, GA, he attended Auburn University where he graduated in 2000 earning a Bachelor of Science in Business Administration with a focus in Management. While at Auburn he met his wife Ashley, a native of Fairhope. In 2003, after spending a few years in Atlanta, Jimmy and Ashley felt called to relocate to Fairhope. They have two daughters, Anna Bowler and Margaret. Jimmy is the oldest of three children, his parents Kay and Reid Conyers still live in Atlanta. He has a brother in Nashville and a sister in Atlanta. Jimmy is a community banker by day, where he works for Merchants & Marine Bank as Alabama Market President. In 2008 he earned a degree from the Graduate School of Banking at LSU.

An active member of St. James Episcopal Church, Jimmy is also a member of Eastern Shore Kiwanis Club and Gulf Shores Kiwanis Club. He has previously served as President of the Gulf Shores Kiwanis Club, President of Family Promise of Baldwin County, and Vice-Chair of Civic and Governmental Affairs for the Coastal Alabama Business Chamber. His wife and daughters are especially active in local theatre and ballet. Jimmy originally ran for office to establish a foundation for the future built upon the four cornerstones of responsible growth, education, economy, and quality of life. In his second term, he hopes to continue solidifying and building upon that foundation.

Jimmy Conyers from Fairhope, AL has participated in elections listed below in the state of Alabama.

The below links are relevant to Jimmy Conyers from Fairhope, AL and are articles or opinion pieces published on Bama Politics. Are you Jimmy Conyers? Do you have an opinion on Jimmy Conyers? Publish an article in our opinion section and your article will appear here. A great way for our visitors to find your content and learn more about your views. Use this contact form to find out how.