Who is Joe Hamilton? 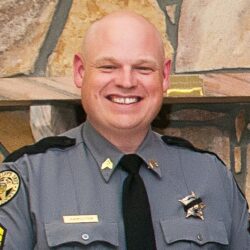 Throughout his time with the Sheriff’s Department, he has patrolled all areas of Lauderdale County and assisted on drug, property, and persons investigations. He also served as the Commander of the Lauderdale County S.W.A.T. team and has been recognized as Supervisor of the Year.

“As Sheriff, I will serve honestly and with integrity from day one. We will build on the foundation laid by Sheriff Rick Singleton. It is my goal that our department be the best Department in the State and one that is a model for other departments in protecting and serving citizens with the utmost professionalism and integrity,” Hamilton said.

Lt. Hamilton also has the support and endorsement of Sheriff Rick Singleton who is retiring after this term. “If you compare the resumes of each candidate, he is by far the most qualified to assume the tremendous responsibilities of the office,” Singleton said during his public endorsement of Lt. Hamilton February 3, 2022.

“Now is not the time to go backward. I will continue to move the Lauderdale County Sheriff’s Office forward,” said Hamilton.

Lt. Hamilton has not made any political promises during his campaign. Rather, he has only laid out his commitments as Sheriff.

Lt. Hamilton is a lifelong Republican and lifelong resident of Lauderdale County. He will apply his conservative values in leading the department and protecting the citizens of our County.

Lt. Hamilton is a leader and will lead on day one. As a Pro-Life Christian, husband, father of three amazing boys, and a Lieutenant with the Lauderdale County Sheriff’s Department, Hamilton understands the importance of having a professional Sheriff’s Department. His experience, commitment, and leadership make him the most qualified candidate for Sheriff of Lauderdale County, AL.

Joe Hamilton from Florence, AL has participated in elections listed below in the state of Alabama.

The below links are relevant to Joe Hamilton from Florence, AL and are articles or opinion pieces published on Bama Politics. Are you Joe Hamilton? Do you have an opinion on Joe Hamilton? Publish an article in our opinion section and your article will appear here. A great way for our visitors to find your content and learn more about your views. Use this contact form to find out how.