Who is Joe Piggott? 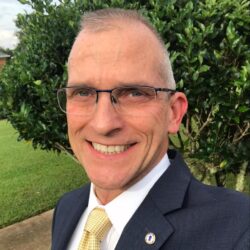 Joe is a devoted family man, Christian, conservative resident of AL District 100. Joe celebrated 20 years of marriage to his wife, Barbara – a registered nurse at a local hospital. The couple have three children; Tara, Ryan, and Grace and are longtime parishioners at Corpus Christi Catholic Church. Joe believes that his decisions impacts the future of you and his family in District 100.

As a trusted and respected member of the law enforcement community, Joe has enjoyed a 29-year career serving at both the local and state levels and currently serves as Commander of the Alabama Law Enforcement Agency’s Highway Patrol Troop A headquartered in Mobile. A decorated veteran of the armed forces, he has served honorably in the United States Air Force and Air National Guard for 34 years attaining the rank of Chief Master Sergeant – the highest enlisted grade in the military. As the Chief Enlisted Manager of the 255 th Air Control Squadron and Superintendent of Command and Control Battle Management Operations, he has deployed numerous times—at home and abroad— in support of contingency operations such as Operation Southern Watch, Operation Enduring Freedom and Operation Noble Eagle. His success in the military and state government is a result of his unmitigated ability to unite people from diverse backgrounds, recognize their potential and lead with absolute confidence.

With so many important issues facing our state, it’s crucially important –more so now than ever—that we have the right person in place when the 2023 legislative session convenes. Joe is ready to serve! He has spent his entire life as a problem solver and being a voice for those in need. His leadership experience in law enforcement has taught him how to listen effectively, clearly define the problem, and develop workable solutions. Joe accomplishes his goals by employing teamwork, sound judgement, common sense, and empathy. He’s not afraid to make tough decisions and is results driven.

While others talk about what they want to do, Joe has spent over three decades DOING it. He has defended our nation and selflessly served his community. As he nears the end of his career in law enforcement, he is eager to continue his service to the citizens of Alabama and realizes that he has a lot to offer in a different capacity.

Education - For far too long, Alabama has ranked near the bottom –or dead last— in just about every education ranking published. As a father, Joe believes that we owe our children access to high-quality education. He believes that each child deserves access to a quality school that places the needs of the students first and employs a common-sense approach to learning.

Infrastructure - Southwest Alabama is a true jewel in Alabama’s crown and makes significant contributions to the state’s economy through Tourism, Industry and Technology. Accordingly, Joe understands the importance of seeing the area is well-represented at the fiscal table and receives it’s fair share of grant and infrastructure monies (GOMESA, CARES Act, etc).

Safety and Security - For 25 years, Joe Piggott wore a uniform with a patch that says “We Dare Defend Our Rights”…Joe will continue to do so in the State House to defend our liberties from the government overreach that we’re seeing more frequently. School and church safety are key issues we face within our community to ensure freedom of education and religion.

Veteran Affairs - As a retired veteran, Joe stands for the rights of those who proudly served our country. This country owes a tremendous amount to our veterans and the families that support our brave men and women.

Joe Piggott from Mobile, AL has participated in elections listed below in the state of Alabama.

The below links are relevant to Joe Piggott from Mobile, AL and are articles or opinion pieces published on Bama Politics. Are you Joe Piggott? Do you have an opinion on Joe Piggott? Publish an article in our opinion section and your article will appear here. A great way for our visitors to find your content and learn more about your views. Use this contact form to find out how.