Who is Jonathan McConnell? 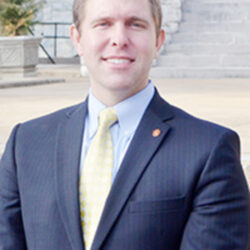 Jonathan McConnell is a Christian, conservative businessman and Captain in the Marines who is running for the United States Senate because it is time to put an end to self-dealing ways of Washington politicians.

A Birmingham resident, Jonathan McConnell grew up in Mobile, Alabama. After college, Jonathan chose to serve his country and joined the United States Marine Corps.

Jonathan served as an Infantry Officer in the Marines. In July 2006, he deployed to the outskirts of Fallujah, Iraq, as a lieutenant in the Third Battalion, Second Marines, Lima Company, Third Platoon. Lieutenant McConnell’s platoon was responsible for over 3,000 house clearances from Fallujah to Ramadi during Operation Squeeze Play.

For his actions and leadership, Lt. McConnell was awarded the Navy and Maritime Corps Achievement Medal with Combat “V” and the Combat Action Ribbon. Redeploying in October 2007, Lieutenant McConnell commanded the Second Mobile Assault Platoon in Weapons Company near the Syrian border. He was awarded the Navy and Marine Corps Commendation Medal for service and selected for Captain prior to his service ending with the Marines.

After returning from Iraq, Jonathan started law school at the University of Alabama. While finishing his first year of law school, and in response to the hijacking of the Maersk Alabama by Somali pirates, Jonathan founded Meridian.us, a global maritime security company. Under Jonathan’s leadership, Meridian has grown and currently employs more than 50 people.

Meridian placed Marine veterans, most of whom served with Jonathan, on merchant vessels in transit near the coast of Somalia. The company has since conducted ground security operations in high-risk areas like West Africa and Southeast Asia and primarily employs U.S. Veterans.

Captain McConnell has an extensive and diverse background in the security industry, with legal expertise centering on International Law. In the military, Captain McConnell graduated from the Advance Infantry Mortar Leader’s Course, the Infantry Officer’s Course, The Basic Course, and Officer Candidate School.

Additionally, Captain McConnell is an NRA-licensed firearms instructor and a Federal Firearms Licensed Dealer. He is Chair of Chapter 117 of ASIS International, a member of the Marine Corps League, InfraGard, the American Bar Association, the Connecticut Maritime Association, the National Defense Trade Association, and the Security Association of the Maritime Industry.

Jonathan McConnell from Homewood, AL has participated in elections listed below in the state of Alabama.

The below links are relevant to Jonathan McConnell from Homewood, AL and are articles or opinion pieces published on Bama Politics. Are you Jonathan McConnell? Do you have an opinion on Jonathan McConnell? Publish an article in our opinion section and your article will appear here. A great way for our visitors to find your content and learn more about your views. Use this contact form to find out how.