Who is Kathy Peterson? 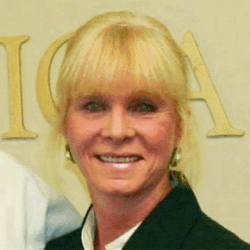 Kathy was raised on a farm in southwest Georgia. She was by far the youngest of five children and grew up in what she believes was the most blessed home and family environment anyone could hope to have. Kathy vividly remembers walking the long trip through the woods every Sunday with her family to attend their community church. "Come rain or shine, we went to church. Our mama accepted no excuses."

When Kathy was still six years old, her daddy suffered a massive heart attack while in the field and was unable to work again. Kathy's brother, who was 18 and recently graduated from high school, went to work at a meat packing plant to feed the family. (Her daddy succumbed to his illness when Kathy was 15.)

When Kathy was 11 years old, her mother was diagnosed with breast cancer. "I always worked during the summer to earn money to buy school clothes. That summer seemed especially important to my mother that the inside of the house be painted. Looking back on it now, I understand that was her way of focusing on something other than her cancer. I strung tobacco and picked cotton to earn enough money to buy paint for the inside of the house. At night I painted as my mother watched and gave instructions. It seemed to help her get through two terrible cancer surgeries and the treatments that followed." When Kathy was 19, her iron-willed mother, who somehow had managed to live for eight years with cancer, went to Heaven.

Kathy graduated from high school at age 17, married, moved to Atlanta and went to work at the telephone company. She had hoped to get hired as a secretary but was told that long-distance operator was the only job available. Kathy took the job and began earning her $68 a week paycheck, which seemed like a lot of money to her at the time. Always pushing herself to excel at whatever job she held, Kathy was able to work her way up through the ranks over the course of several years.

Kathy says, "My parents instilled in me a strong work ethic, consideration for others, belief in myself and belief in our Creator. These have carried me through every challenge or opportunity in my life. As often happens when very young couples marry, my marriage didn't last. Even so, I was blessed with a spectacular daughter."

Kathy says, “So many of today’s children and young adults don’t have the privilege of growing up in a supportive, loving family unit. They live in a hurry-up, superficial environment and aren’t taught simple joys such as having family dinner at the kitchen table, playing football or hide-and-seek, or just riding their bicycles around the neighborhood. Parents are obsessive about “watching” their children, protecting them from disappointment and telling them they “did a good job,” even when they didn’t. I don’t see the value in pretending someone did a good job if they didn’t, because they will face a lot of disappointment when they enter the real world and are told the truth.”

Ten years after moving to Atlanta, Kathy married Dale and was transferred to Birmingham, where she continued to progress with the company. Her biggest drawback was the lack of a college education. While working 12-hour days, often six days a week, Kathy attended college at 6 a.m., during lunch, after work, on Saturdays and during mini-terms. In three years she graduated with a bachelor’s degree. A couple of years later, with a different but equally demanding job, Kathy attended graduate school at night and on weekends and earned that degree in one year.

Kathy has a Bachelor’s Degree in Marketing and Finance from the University of Alabama and a Master's Degree in Public and Private Management from Birmingham Southern College. She also had advanced management studies at Wharton School of Business.

Kathy retired in 1995, and she and her husband Dale immediately got busy creating and running a chain of retail pet supply stores. One of the most important parts of each store was a pet adoption center, where homeless dogs and cats were available for adoption. Each dog or cat was given whatever healthcare it needed and also had either been spayed/neutered or left the adoption center with a spay/neuter certificate.

Kathy is an advocate for homeless animals and has been responsible for the adoption of over 10,000 homeless dogs and cats in Alabama. She co-hosted, at pet store locations, a weekly two-hour radio show. In Addition to the radio show, she co-hosted a 30-minute weekly television show on ABC 33/40 in Birmingham. She used these two venues to educate the public on the plight of homeless animals and to promote adoptions. She also appeared weekly on ABC 33/40 news at noon to promote animal health and adoptions.

Kathy has been married for 33 years to Dale Peterson, her best friend whom she lovingly refers to as “that gun-toting, conservative Alabama activist.” A businessman who made an unsuccessful run at Alabama Commissioner of Agriculture and Industries in 2010, Dale has remained committed to their conservative principles and has worked tirelessly to see that conservative, business-minded men and women are elected in Alabama and across the country.

Kathy says, “I made the decision to seek the office of President of the Alabama Public Service Commission after a lot of thoughtful consideration. I have never held political office, which most today believe is a huge positive, as do I. Almost everyone is tired of recycled politicians who make careers of political job-hopping while trying to climb the political ladder. Those who do that mistakenly refer to themselves as “servants of the public,” when in reality, they are just “servants to themselves,” feeding at the government trough at taxpayers’ expense. That must stop.”

Kathy is the kind of person you know you can count on. That’s just the way her parents raised her. Her word is all you need. She has no visions of grandeur or glory. Her only goal as President of the Alabama Public Service Commission will be to apply her 30 years of business experience to help create a more positive business environment, which in turn will create a healthier community environment, resulting in a stronger and more prosperous Alabama for generations to come.

Kathy Peterson from Birmingham, AL has participated in elections listed below in the state of Alabama.

The below links are relevant to Kathy Peterson from Birmingham, AL and are articles or opinion pieces published on Bama Politics. Are you Kathy Peterson? Do you have an opinion on Kathy Peterson? Publish an article in our opinion section and your article will appear here. A great way for our visitors to find your content and learn more about your views. Use this contact form to find out how.

The below links are relevant to Kathy Peterson from Birmingham, AL and were found via our own research or sent to us from readers like you. These links are not associated with Bama Politics.