Who is Lashunda Scales? 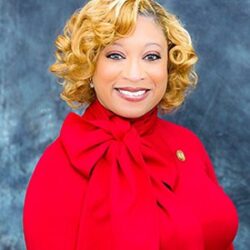 The Honorable Lashunda Scales was elected in November 2018 to serve as the Jefferson County Commissioner for District 1 in Jefferson County, Alabama. Scales was unanimously voted as President Pro-Tem by her peers upon taking office. She is a former City Council Member for the City of Birmingham (2009-2018) and an active resident in the metro area for 25 years.

Scales is best known for her public policy advocacy for underserved residents of Jefferson County, building regional alliances to support local governments, and advancing equal opportunities for small businesses and women in government.

Lashunda Scales is an alumna of the prestigious Harvard Kennedy School of Government, Leadership Birmingham, Jefferson State Community College and Stillman College (attended). She is a 20-year veteran public relations and marketing professional. She and her husband Michael have been married for 29 years. They have two beautiful daughters and are faithful members of Faith Chapel Christian Center in Birmingham, AL.

Lashunda Scales from Birmingham, AL has participated in elections listed below in the state of Alabama.

The below links are relevant to Lashunda Scales from Birmingham, AL and are articles or opinion pieces published on Bama Politics. Are you Lashunda Scales? Do you have an opinion on Lashunda Scales? Publish an article in our opinion section and your article will appear here. A great way for our visitors to find your content and learn more about your views. Use this contact form to find out how.

The below links are relevant to Lashunda Scales from Birmingham, AL and were found via our own research or sent to us from readers like you. These links are not associated with Bama Politics.