Who is Marche Johnson? 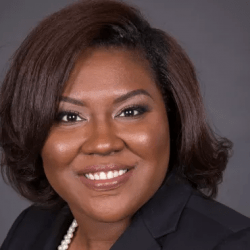 As a product of North Montgomery neighborhoods and the Montgomery Public School system, City Council candidate Marche’ T. Johnson is no stranger to District 3. Born and raised in the neighborhoods of Trenholm Court and Sheridan Heights, she has first-hand experience with the day-to-day issues impacting the residents of District 3. Johnson not only acknowledges the concerns of the elderly and working-class but also holds a special place in her heart for the city’s youth. Johnson’s strong desire to give back and tenacity for change has led her to become a candidate for District 3 City Council. Inspired by the strong men and women of the community that came before her, Marche’ T. Johnson is no stranger to rolling up her sleeves and getting the job done. She had to work tirelessly to overcome several obstacles during her life. From a teenager, whose mother passed away at a young age to becoming a young mother herself, Marche’ never backed down in the face of adversity, instead, she rose to the occasion and exceeded the standard.

After attending AUM with plans of becoming a lawyer, Johnson decided that she would selflessly serve this great nation as a member of The United States Army. During her time in service, Johnson dedicated her life to honor and sacrifice both stateside as well as in the Maysan Province in Iraq and Kandahar, Afghanistan. Marche’s time in service has resulted in her being a recipient of many awards and accolades including but not limited to: earning A Bachelors Degree of Science in Psychology from Troy University, three Army Commendation Medals, six Army Achievement Medals, two Army Good Conduct Medals, National Defense Service Medal, Iraq Campaign Medal, Global War on Terrorism Medal, NCO Professional Development Ribbon, and Army Service Ribbon.

Marche’s days of serving the country have come to an end but her service to the District 3 community of Montgomery is just beginning. Johnson hopes to change the narrative of distrust between the community and local officials by facilitating collaboration, communication, and education around addressing issues present in District 3. She believes that the community’s voice should be heard and that District 3 deserves a champion to not only deliver those concerns to city hall but stand firm to get things done. Johnson’s unwavering faith in Montgomery’s ability to change and prosper combined with her merit as a leader makes her an ideal candidate for District 3 City Council. As she’s done many times, Marche’ is On The Move and ready to lead by example!

Marche Johnson from Montgomery, AL has participated in elections listed below in the state of Alabama.

The below links are relevant to Marche Johnson from Montgomery, AL and are articles or opinion pieces published on Bama Politics. Are you Marche Johnson? Do you have an opinion on Marche Johnson? Publish an article in our opinion section and your article will appear here. A great way for our visitors to find your content and learn more about your views. Use this contact form to find out how.