Who is Marcus Jackson? 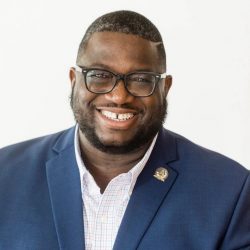 Voters in Prattville’s District 2 elected Marcus Jackson to his city council seat in October 2016 because of his commitment to push for economic progress, to improve educational opportunities, to further youth outreach, and to build communal pride within the district. District 2 holds a special place in Jackson’s life because he grew up in that district and continues to support it. He represents a proud product of the community and Autauga County School System. These components drive him to serve and work to make the community an even better place. He has a daughter, Danielle, that lives in Powder Springs, Georgia.

He graduated from Prattville High School and Auburn University where he earned a business degree in Management. He spent several years working in the Atlanta area before returning home to work in education. In addition to teaching math, Jackson coached football at Prattville Junior High, Prattville High and Autaugaville High Schools during more than ten years as an educator. Jackson currently works as the Behavior Coach for the Autauga County Board of Education.

His commitment to the city and county’s youth continues beyond his work in schools. For more than 20 years, he has mentored hundreds of young people through Brother2Brother and Sister2Sister Mentoring and Project Uplift. He also serves as a board member for Alabama E.D.G.E. – an innovative program that exposes students to life and career skills in hands-on, real-world environments.

Not only is Jackson active with the youth of the community, he works on several committees to better the city as a whole. Jackson currently serves on the Streets, Drainage and Lights Committee; Urban Management and Cemetery Committee, and the Wastewater and Stormwater Committee. Additionally he leads by serving as chairman of the Maintenance-Vehicles, Facilities and Lots Committee.

Long before he became a public servant, Jackson dedicated not only his career, but his life to teaching girls and boys and young men and women the value they bring to their communities and their potential to do the same in the world. He’s been recognized for that enlightened service and work. The Prattville-Autauga Character Coalition awarded the Councilman the 2012 Service Organization of Character Award, and the Autauga County Education Association honored him with the Rookie Teacher Award in 2007. Serves as a member of The National Black Caucus of Local Elected Officials (NBC-LEO) and The Autauga County 4-H Advisory Council. He is a 2019 Graduate of The Alabama League of Municipalities Certified Municipal Official Program and a 2019 Graduate of Leadership Autauga County.

Marcus Jackson from Prattville, AL has participated in elections listed below in the state of Alabama.

The below links are relevant to Marcus Jackson from Prattville, AL and are articles or opinion pieces published on Bama Politics. Are you Marcus Jackson? Do you have an opinion on Marcus Jackson? Publish an article in our opinion section and your article will appear here. A great way for our visitors to find your content and learn more about your views. Use this contact form to find out how.