Who is Mark Craig? 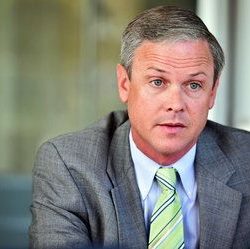 Mark was born in Madison County and graduated from New Hope High School. After high school, Mark attended the University of Alabama, where he earned a Bachelor of Science in Commerce and Business Administration with a major in Accounting. Mark is the son of Jerry Craig, former Madison County Commissioner, and Marion “Little Bit” Jones. Mark has one sister, Lynn Parker, a third grade teacher at Owens Cross Roads School, and one nephew, Brady Lynn Parker. Mark is married to Lakely Felten. They have two children, Bridges and Benton.

Before becoming License Director, Mark was an Accountant in the Tax Collector's office, where he worked for Tommy Ragland and Lynda Hall. Mark's political aspirations and desires started at an early age where he has campaigned for 18 years on his father's campaigns and served as Campaign Coordinator on his last bid for re-election. Mark has attended numerous schools and classes dealing with the Association of Tax Administrators and Laws.

During Mr. Craig's term, his priorities are and will be to continue an open door policy, accountability, equality, and providing the very best services to the people of Madison County.

The below links are relevant to Mark Craig from Huntsville, AL and are articles or opinion pieces published on Bama Politics. Are you Mark Craig? Do you have an opinion on Mark Craig? Publish an article in our opinion section and your article will appear here. A great way for our visitors to find your content and learn more about your views. Use this contact form to find out how.