Who is Mark Russell? 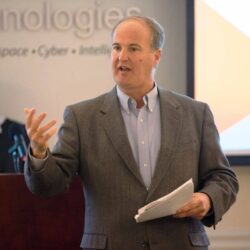 Since the mid-1990s, Mark has served his community in a number of organizations, with a particular focus on children’s needs. The father of two daughters, he has worked toward providing equal opportunities for all area children.

Mark has lived in Huntsville since 1973. He attended Jones Valley Elementary School, Whitesburg Middle School and Huntsville High. He graduated from Auburn University in 1985 with a Bachelor of Science in Business Administration.

Mark has held various positions in the electronics and defense industries and now is Operations Manager of Defense Technologies, Inc., a locally owned government contractor.

In his spare time, Mark referees high school and youth football games. He has been selected several times to work State Championship and All-Star games.

Mark is married to April Russell and they have two daughters, Mary Allen and Bailey. The oldest Mary Allen is an accountant for Ernst & Young in Atlanta. Bailey is a graduate of Washington and Lee University.

Mark Russell from Huntsville, AL has participated in elections listed below in the state of Alabama.

The below links are relevant to Mark Russell from Huntsville, AL and are articles or opinion pieces published on Bama Politics. Are you Mark Russell? Do you have an opinion on Mark Russell? Publish an article in our opinion section and your article will appear here. A great way for our visitors to find your content and learn more about your views. Use this contact form to find out how.