Who is Matthew Wade? 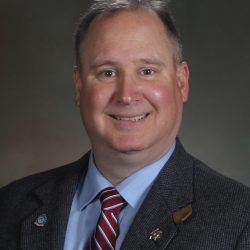 The first deputy to ever be selected from the Sheriff’s Office to attend the F.B.I. National Academy in Quantico, Virginia he graduated in the 226th Session. Sheriff Wade was the first law enforcement executive in the nation to graduate from the Department Homeland Security Leadership Academy, FBI National Academy and National Sheriff’s Institute.

Sheriff Wade joined the Army Reserve while a junior in high school in the split option program. This allowed him to attend basic training during the summer of his junior year at Ft. Sill, Oklahoma. After Basic Training, he returned to Sylacauga High School for his senior year. Upon graduation, he attended Aviation Operations Specialist training at Ft. Rucker, Alabama and was placed in an aviation unit in Pell City, Alabama.

In 1996, he began a career in law enforcement at the Calhoun County Sheriff’s Office working as a correctional officer through an employment program between the sheriff’s office and JSU. He worked his way up the ranks to a deputy sheriff, investigator, Emergency Services Team member, and Chief Deputy. Sheriff Wade served as chief deputy for Sheriff Amerson for 12 years.

He was appointed Sheriff following the retirement of Sheriff Amerson in 2016 and was elected for a full term in 2018.

Sheriff Wade married his high school sweetheart, and he has an adult daughter and seventeen-year-old son. He previously coached youth baseball and football in Alexandria. Hunting, fishing, and playing the bagpipes are among his other hobbies outside of his career.

The below links are relevant to Matthew Wade from Jacksonville, AL and are articles or opinion pieces published on Bama Politics. Are you Matthew Wade? Do you have an opinion on Matthew Wade? Publish an article in our opinion section and your article will appear here. A great way for our visitors to find your content and learn more about your views. Use this contact form to find out how.