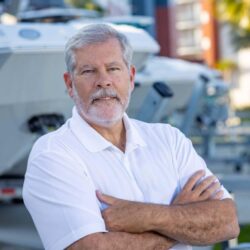 Fort Morgan resident Michael Ludvigsen is a Gulf Coast native and a sixth generation Baldwin County resident with family ties dating back here to the 1830s. He spent nearly 30 years in the civil engineering industry and worked as a computer systems operations specialist, working with various public and private sector projects across the Gulf Coast region and in Missouri and Illinois. After his retirement, he spent nearly a decade in marine sales and consulting before starting Bon Secour Bay Oyster Company in 2016, where he cultivates and wholesales oysters from his oyster farm.

Ludvigsen studied Business at Spring Hill College in Mobile and has additional credentials in drafting, CAD and GIS from George Stone Vocational Tech, Pensacola Junior College and the University of West Florida.

He continues to be an active member of the Fort Morgan Fire Rescue team, currently serving as Battalion Chief after his stint as Acting Chief in 2020. He is the current Board President for the organization and has continually supported efforts to find ways to get more resources and support for keeping Fort Morgan residents and visitors safe. He is also a 2008 graduate of the FBI Citizens Academy.

He currently serves on the Board of Directors of the Fort Morgan Civic Association, where he is the Government Affairs Liaison. In that capacity, he advocates for and tries to help community residents get the help and services they need from all levels of government, be it local, county, state or federal. He also serves as a member of the Coastal Alabama Business Chamber, where he has been a Chamber Ambassador for nearly a decade and having spent four years as a member of the Marine Trades committee making sure our small businesses and industries have their voices heard.

Growing up on the water and now having an oyster farming business, he is incredibly passionate about conservation and protecting our beautiful waters and natural resources, serving as a member of Oyster South, the Central Gulf Marine Trades Association and Mobile Baykeeper, and helps others learn about our waters and boating safety as a member and trustee of the Perdido Bay Power Squadron (where he earned a Merit Mark) and also has certifications as a Master Scuba Diver.

Ludvigsen also values civic involvement, making sure that he gives back to the places that have given so much to him. He has worked and volunteered with numerous civic organizations throughout the years in several areas, including Big Brothers – Big Sisters, the Boys and Girls Club, the Fellowship of Christian Athletes, the Knights of Columbus, the Red Cross, the Kiwanis Club and as a member of the Board of Directors for the Fairhope Sunset Rotary Club. He is a two-time Paul Harris Fellow with Rotary International and concurrently serves as a Commodore with the Rotary International Yachting Fellowship and a life member of the Rotary Scouting Fellowship. He is a former Boy Scout Leader and was awarded the Silver Beaver and the District Award of Merit.

Michael T. Ludvigsen, Jr from Gulf Shores, AL has participated in elections listed below in the state of Alabama.