Who is Newton Cromer? 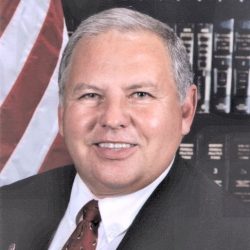 J. Newton Cromer was first elected to the Saraland City Council in 2004. He has served as the Council President, Public Works chair, Public Safety, Police and Fire, and the Park, Recreation and Senior Activities.

Newton has been married to Carol Earle Cromer since 1981, and they have two grown children, Christine Cromer Meerman and Joseph B. Cromer. They also have two adorable grandchildren, Corry and Richie. He is a graduate of Spartanburg High School and Clemson University. He has lived in Mobile County for over 44 years.

Newton is retired from the U.S. Army Corps of Engineers as a Real Estate Project Manager. He is a nationally recognized Real Estate instructor for the U.S. Army Prospect Program and has completed Army Leadership training. He is currently consulting with the U.S. Federal Courts and is active in many Saraland area service organizations. He is an active member and Deacon at Shiloh Baptist Church in Saraland, AL.

Newton has been actively served for over 30 years in Saraland, coaching, administering and mentoring Saraland youth in baseball, softball, football and Upward programs. He is an original avid supporter of Saraland City School System, our senior programs, park and recreational activities, public safety programs, street resurfacing projects, upgrades to sanitation facilities, active with the Saraland Chamber of Commerce and supports our animal shelter, public health and environmental initiatives. Newton is an active member of Keep Saraland Beautiful, Past President of Saraland Lions Club, Pentalpha Lodge, National Rifle Association, a Woodbadge trained Boy Scout Leader, Salvation Army Board and many other service organizations.

Newton has a passion for service to our community and the betterment of the quality of life for all citizens.

Newton Cromer from Saraland, AL has participated in elections listed below in the state of Alabama.

The below links are relevant to Newton Cromer from Saraland, AL and are articles or opinion pieces published on Bama Politics. Are you Newton Cromer? Do you have an opinion on Newton Cromer? Publish an article in our opinion section and your article will appear here. A great way for our visitors to find your content and learn more about your views. Use this contact form to find out how.