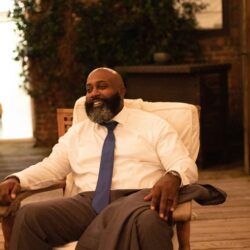 Ontario J. Tillman was born and raised in the great city of Bessemer, Alabama. He is a family man, a father of three children and married to his beautiful wife Yvette, for over five years.

Tillman grew up on the south-side of Bessemer, Alabama, where his family was active in the community serving on notable campaigns such as the campaign to elect Mr. Lawrence McAdory. Ontario learned early on the value of service, values of family, hard work, and sacrifice.

Ontario has placed the community first in his life, as well as in his practice of law. He understands the nature and the needs of his community and has put forth the effort to ensure that the people of District 56 come first and that their voices are heard.

He is a graduate of Jess Lanier High School. Graduate of Alabama A&M University, with a B.S. Degree in Special Education and a M.Ed in Collaborative Teaching. He received his Juris Doctorate Degree from Miles Law School. He is currently a partner with the Maxwell Tillman Law Firm, located in Downtown Birmingham, AL.

Ontario J. Tillman from Bessemer, AL has participated in elections listed below in the state of Alabama.

The below links are relevant to Ontario J. Tillman from Bessemer, AL and are articles or opinion pieces published on Bama Politics. Are you Ontario J. Tillman? Do you have an opinion on Ontario J. Tillman? Publish an article in our opinion section and your article will appear here. A great way for our visitors to find your content and learn more about your views. Use this contact form to find out how.