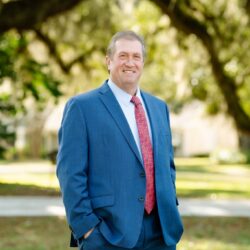 A Mobile native, Paul graduated from B.C. Rain High School, attained his Associate Degree in criminal justice and his Bachelor of Science Degree in homeland security from Columbia Southern University.

From 1983 to 1988, he served as a United States Navy Seabee. In 1989, Paul began his law enforcement career as an officer with the Montgomery Police Department. He returned to Mobile in 1990 to join the Mobile Police Department, and in 1999, Paul became a deputy at the Mobile County Sheriff’s Office. In 2014, Paul graduated from the FBI National Academy Session #258. Then, after rising to the rank of Captain, Paul was appointed commander of MCSO’s Criminal Investigations Division in 2015.

With three decades in law enforcement, he has served in several roles including uniformed patrol, general investigation, homicide investigation, and narcotics/VICE investigation. These accomplishments highlight Paul’s dedication to serving the citizens of Mobile in a professional, respectful, and trustworthy manner.

Paul formally announced his candidacy for Mobile County Sheriff on October 11, 2021. “It has been an honor to have served under Sheriff Sam Cochran since 2006,” says Paul. “Sheriff Cochran’s retirement at the end of his term leaves enormous shoes to fill. I am confident in my ability to continue his great legacy.”

Paul Burch from Mobile, AL has participated in elections listed below in the state of Alabama.

The below links are relevant to Paul Burch from Mobile, AL and are articles or opinion pieces published on Bama Politics. Are you Paul Burch? Do you have an opinion on Paul Burch? Publish an article in our opinion section and your article will appear here. A great way for our visitors to find your content and learn more about your views. Use this contact form to find out how.