Who is Portia Shepherd? 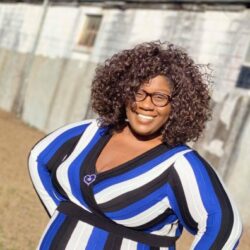 A motivated professional with a proven track record of building relationships and implementing life-changing strategies, Portia Shepherd is a woman for the people. Struggling internally in high school, Portia dropped out. Yet, she didn't give up. Portia was determined to better herself. As a result, she received her GED the same year and went on to pursue higher education.

As a native of the Blackbelt of Alabama, Portia is a proud graduate of Miles College, where she received her Bachelor of Arts Degree in Political Science and became a proud member of Zeta Phi Beta Sorority, Inc. After graduating from Miles, she then went on to pursue her Masters in Non-profit Leadership and Management from New England College.

Portia is a consultant and keynote speaker with more than fifteen years of experience across various industries including but not limited to political campaigns, nonprofit and professional services, and environmental improvements. In 2019, Portia was recognized as an expert in Sexual Assault & Domestic Violence.

As a political consultant, she has advised current and past government officials and industry associations. Portia has also served on the Board of Directors for several organizations. As a member of Zeta Phi Beta Sorority, Inc., Portia has taken the principles of her sorority and has used them in her everyday life; including her role as the Founder & Executive Director of Blackbelt Women Rising, and as an educator teaching World History at Selma High School.

Through her efforts of working with citizens of the Blackbelt region who are fighting for health and environmental improvements, she has appeared on FOX News w/ Tucker Carson, The Washington Post, NowThis, BBC World News, HBO Last Week Tonight, local television stations.

"I come from proud a family that has been involved with public service for as long as I can remember. I want to be your voice. We need to focus on economic development, refining our school systems, decriminalizing cannabis, and environmental improvements. With over a decade of government experience and environmental advocacy, I know what it takes to find solutions, navigate the complicated governmental agencies, and get things done." It's #timetowork!

Portia Shepherd from Uniontown, AL has participated in elections listed below in the state of Alabama.

The below links are relevant to Portia Shepherd from Uniontown, AL and are articles or opinion pieces published on Bama Politics. Are you Portia Shepherd? Do you have an opinion on Portia Shepherd? Publish an article in our opinion section and your article will appear here. A great way for our visitors to find your content and learn more about your views. Use this contact form to find out how.