Who is Ralph Dawe? 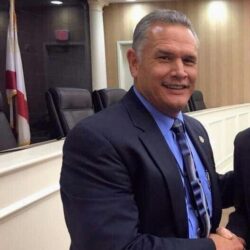 In 1988, Ralph and Roxanne relocated to Scottsboro, Alabama. They have four children, Ralph IV, Chantel, Denise and Taylor and their children all attended the Scottsboro School system. He was hired as a police officer in March 1989, worked up through the ranks of patrol, detectives, and administration and was appointed as Chief of police in 2006. In June of 2020, he retired with 31 years of service and 14 years in the position of chief. He is a standing member of the FBI National Academy, Alabama Chiefs of Police Association and Fraternal Order of Police.

In June 2020, Ralph Dawe announced his candidacy for the office of City Council Place 1 and was elected on August 25, 2020. His campaign platform was to make sure our city employees were treated and paid fairly to perform their jobs more efficiently while serving the citizens of Scottsboro. He also focused on making the city's building codes and restrictions more inviting for developers and new home builders and bringing more industry and small businesses to Scottsboro. Most importantly was his desire to improve the city's infrastructure to make it more attractive to prospective businesses and residents. Ralph Dawe desires to continue to serve the citizens of Scottsboro as he has for the past 31 years as a law enforcement officer and is always available for anyone that may have any concerns. He can be reached at 256-599-3433 or with the contact form below.

Ralph Dawe from Scottsboro, AL has participated in elections listed below in the state of Alabama.

The below links are relevant to Ralph Dawe from Scottsboro, AL and are articles or opinion pieces published on Bama Politics. Are you Ralph Dawe? Do you have an opinion on Ralph Dawe? Publish an article in our opinion section and your article will appear here. A great way for our visitors to find your content and learn more about your views. Use this contact form to find out how.