About Reginald A. Crenshaw 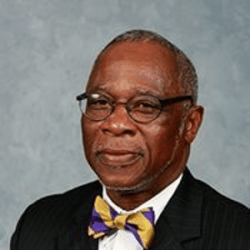 He is serving his second term on the school board, having been elected in 2008 and serving a year as president.

Crenshaw is the director of Title III programs Bishop State Community College. He is a 1974 graduate of Blount High School, and he holds a bachelor’s degree in economics from Morehouse College in Atlanta, as well as a master’s degree in public administration from the University of South Alabama. He has completed master’s coursework in general counseling from Alabama State University in Montgomery, and he holds a doctorate in higher education administration from the University of Southern Mississippi.

He is the father of three children and the grandfather of five.

Crenshaw’s focus during his tenure on the school board includes working to increase the graduation rate.

“We have reached 82 percent and I would like to see it go even higher. (The goal) is increasing the graduation rate and reducing the dropout rate,” he said.

His goal for the entire district is the completion of construction projects that involve renovations as well as new buildings, as well as the district being able to provide more professional development opportunities for teachers.

Crenshaw believes that the elimination of the high school graduation exam has contributed to the reduction of the dropout rate.

Known contact information for Reginald A. Crenshaw from Mobile, AL.