Who is Sheila Tyson? 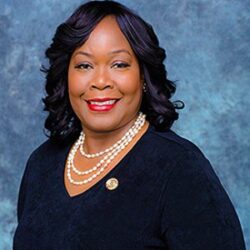 Commissioner Tyson maintains a reputation as a community leader for the people. Her most proud and notable accomplishment is the act of leading the Alabama Coalition on Black Civic Participation in its pursuit to concentrate on the formerly incarcerated population to engage and mobilize them to participate in the 2008 presidential election. The Secretary of State office purged 9,000 ex-felons from the registration rolls, which was further complicated because of the confusion and difficulty in identifying which ex-felons were allowed to register and vote, and which ones were not. While the law stated ex-felons, who were not convicted of crimes of moral turpitude were allowed to vote, it failed to identify precisely which crimes were excluded from this definition. Coalition members visited local jails in Birmingham and registered more than 500 offenders currently serving time, and delivered absentee ballots. All 500 voted.

With hopes to create a better footprint for the southwestern district, Commissioner Tyson assisted in passing laws that removed alcoholic coolers from convenience storefronts so minors no longer have access, helped pass a smoke-free ordinance for four cities in the state of Alabama, completed a one-year training program for Organizing Project, started a walking team for 99 communities, and was selected to host a webinar for Equal Voices, which was shown in 27 states across the country. She is certified facilitator by the International Research Board and UAB and was one of 13 people chosen to lead a webinar about getting influenza vaccination grassroots efforts up and running. She has also assisted with starting eight gardens within the West End community and helped several uninsured women receive breast cancer screenings through the Reach Us program. She fought to save Cooper Green Mercy Hospital before it ended inpatient operations and continues to work to stop sewer rates from increasing. Currently, she assists with feeding needy citizens of Birmingham three meals a day.

Her participation in several year-long conferences like Alabama Grassroots Leadership Development and National Organization of Black Elected Legislative women enabled her to become a more effective leader, allows her to create relationships with other women in politics, helps other women rise to leadership roles, and most importantly enhances the lives around her community. She has also attended many different workshops, including Tandeka’s program on childhood obesity prevention. Commissioner Tyson is also a member of the National Community Reinvestment Coalition, Neighborhood USA, Birmingham Board of Education Executive Committee, UAB Minority Health& Health Disparities Research, a lifetime AIDS and HIV advocate, a part of nine PTA’s, started a nonprofit called Building Healthy Communities. In July 2017, she was selected to travel to Kenya and empower women in politics abroad.

Commissioner Tyson not only cares about her community, but Alabama as a whole. Working overtime to insure her community and surrounding communities are safe. Hoping residents will feel proud of the area they call home.

Sheila Tyson from Birmingham, AL has participated in elections listed below in the state of Alabama.

The below links are relevant to Sheila Tyson from Birmingham, AL and are articles or opinion pieces published on Bama Politics. Are you Sheila Tyson? Do you have an opinion on Sheila Tyson? Publish an article in our opinion section and your article will appear here. A great way for our visitors to find your content and learn more about your views. Use this contact form to find out how.