Who is Stan Hogeland? 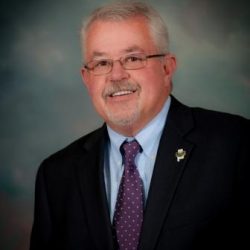 Mayor Stan Hogeland was born and raised in Gardendale. He was employed by the City of Gardendale for over thirty-five years, working through nine administrations and three mayors. Mayor Hogeland retired as the Gardendale Parks and Recreation Director in 2012.

Mayor Hogeland served as the Gardendale City Council President from the time he was elected in October 2012 until he was appointed mayor on August 2, 2015, by Mayor Othell Phillips. Mayor Phillips resigned the office to take a position with the Jefferson County Commission. After finishing that term as mayor, Stan ran for mayor unopposed in 2016 and 2020 and is now serving his third term.

As a councilman and now as mayor, Stan is committed to diligently working to bring in new business and to help existing businesses thrive in the City of Gardendale.

Stan’s devotion to the City of Gardendale is exceeded only by his love for God and family. Married to the former Susan Richey, he considers his wife his greatest asset and best friend.

Susan and Stan are proud parents to their son, Keith, his wife, Diana, and granddaughter Harper; their daughter, Krisi, and her husband, Chase; and grandson Cooper. Stan’s sister, Linda, and mother, Eloise, live nearby and are an important part of his life. Stan’s father passed away in 2006. His dad was a police officer and a major influence in Stan’s life, which helped mold his commitment to public service.

The Highlands are members of Gardendale First Baptist Church.

Stan Hogeland from Gardendale, AL has participated in elections listed below in the state of Alabama.

The below links are relevant to Stan Hogeland from Gardendale, AL and are articles or opinion pieces published on Bama Politics. Are you Stan Hogeland? Do you have an opinion on Stan Hogeland? Publish an article in our opinion section and your article will appear here. A great way for our visitors to find your content and learn more about your views. Use this contact form to find out how.