Who is Steve Smith? 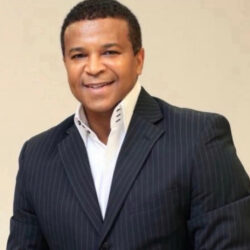 Steve Smith graduated from Litchfield High School and was born and raised in the Gadsden area. Steve is also a DeVry Institute of Technology graduate with a degree in electronics.

Steve accepted Jesus as his Lord and savior in 1988 and later received the Baptism of the Holy Ghost. Steve served faithfully in his home church, on the media ministry, Evangelism team, prison ministry, convalescent care, and marriage ministry, and as a trustee for several years. Steve accepted the call of God to preach the gospel in 1997 and remained planted and faithful as a minister for the next ten years. Steve was promoted and ordained as an Elder, then elevated and ordained as a Bishop.

Steve founded New Destiny Christian Church in 2007 with a handful of people inside their homes. His love for God, his love to serve God’s people, and his deep desire to win souls for Jesus is the passion behind all he does for the Lord. Under Pastor Steve’s leadership, New Destiny burned their 15-year mortgage on their first sanctuary in less than two years, and since then, it has also built a brand new Million dollar facility.

Steve is under the Spiritual covering of Dr. R.A. Vernon, Pastor of the Word Church in Cleveland, Ohio.

Steve’s call is to build relationships in the Body of Christ across all denomination lines. Prayer, his unique preaching style, the cloak of humility he wears, and the boldness to preach the Word without compromise are why many lives are being transformed, delivered from strongholds, and discovering their Destiny in God.

Steve is running for office because he believes his years of dedicated service solidifies him to serve with Character, make the community (people) a priority, and use his skillset to collaborate and improve Gadsden.

Steve Smith from Gadsden, AL has participated in elections listed below in the state of Alabama.

The below links are relevant to Steve Smith from Gadsden, AL and are articles or opinion pieces published on Bama Politics. Are you Steve Smith? Do you have an opinion on Steve Smith? Publish an article in our opinion section and your article will appear here. A great way for our visitors to find your content and learn more about your views. Use this contact form to find out how.